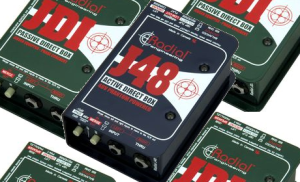 The goal of the survey was to determine if cost and brand name were good determining factors in quality.

That main question posed in the survey was “What is your opinion of the following direct boxes for use in the live environment?”  There is a natural bias in any survey and I think these three points should be considered when looking at the quality ratings;
1. Expectations of a DI box based on expertise.  The more experience with the different types of DI boxes, the easier to hear the difference between the good and the bad.
2. Usage of the DI – such as for keyboards verses a guitar.  Modern keyboards can spit out a signal way above ‘line level’ and require a lot of headroom which some DI’s can’t handle, thus the usage can make a difference in the rating.
3. Rating by brand.  A person might rate a brand very high just based on word-of-mouth though that’s not what the survey intended.

Finally, all ratings are not based on the same number of survey takers.  For example, the survey was arranged so if someone didn’t have an opinion on a particular Direct Box, they could leave it blank or select “Never used.”  Check out the raw data if you really want to know the numbers.

The first question pertaining to the survey-taker’s role was “what is your background; sound tech, musician, or both.”  Fifty-two percent of those surveyed were sound techs.  Another forty-two percent were both sound techs and musicians.  Only six percent were only musicians.  The survey was presented to those who follow me on twitter (church sound tech’s, worship leaders, and musicians), those who visit this web site, and those on a pro-audio site (guys that run live sound for national recording musicians).  Therefore, ninety-four percent of the survey-takers were people who deal with the quality of sound as the audience hears it.

The second question pertaining to Direct Box quality presented data that was summarized based on the average rating of the Direct Box.  The initial findings showed that the average reviews for direct boxes seen at the on-line retailers do NOT always match up with my survey results.  It’s possible that this is a result of a musician hearing the sound quality through a stage monitor or on the stage vs. a sound pro hearing the quality via the house speakers.  Because the vast majority of survey-takers work behind the mixer, this is a possibility but there is no research into the on-line retailer user reviews to support or deny this idea.

Do you get what you pay for?  Does brand make a difference?  Let’s explore the detailed findings based on ratings.

DI Boxes were rated on a scale of poor (1), ok (2), good (3), great (4).  The results below list the model and the average rating.  50 people were surveyed though not all had experience with all DI’s.  See footnote section for raw data.

Behringer ULTRA-DI DI600P Passive Direct Box (1.1): It’s cheap, it sounds cheap, and you should avoid it at all costs.

Live Wire Solutions ADI Active DI Direct Box (1.8): You do get what you pay for.

Behringer ULTRA-DI DI100 Direct Box (1.9): Yes, a company can have not only two but THREE direct boxes rate this poorly.  The survey results for this one surprised me.  33% rated it poor.  43% rated it ok.  24% rated it good.  One user of Behringer DI’s said “[they] sound good, following 2 years in a mobile church/church in a high school set up environment they are beginning to show durability issues – the attenuation buttons, for example, are a little sketchy after the abuse.”   No matter how I look at it, with 76% rating it less than “good,” I’m avoiding it as well as any Behringer DI boxes.

ART ARTcessories Series (2.0) & ART PDB Passive Direct Box (2.0): Both of these received an overall rating of OK but included poor ratings and good and great ratings.  The PDB had quite a few more survey respondents than the ARTacessories DI but also quite a few poor ratings as well.  I avoid products with such a wide range of reviews.

Boss DI-1 Direct Box (2.0): This one completely surprised me.  Boss has been making pedals for a long time.  Yet, the majority of people who have used these said they were “Ok” at best.  Only one person rated anything above “OK.”  This is a disappointing product from BOSS, especially with a $100 tag.

BBE DI-1000 Active/Passive Direct Box (2.2): $250 towards mediocrity, that’s how the survey results read.  I checked for on-line ratings and it received 4/5 stars.  Therefore, I think it’s time to mention the aspect of complexity.  The BBE includes knobs for setting Pad options as well as phase correction.  As the owner of an LR Baggs Para Acoustic DI, I do know that it takes time and patience to make my Baggs DI produce an awesome sound through the notch filter and other settings.  If you are considering any of the BBE DI’s, take them for a test drive and read the manual.  If you still can’t get the sound you want, return it.

Live Wire Solutions SPDI Passive Direct Box (2.3): Not many people had an opinion.  Those that did said it was ok.

Whirlwind IMP 2 Standard Direct Box (2.4) and the Whirlwind Director Deluxe Direct Box (2.7): Now we are finally approaching some good products.  Users of the Whirlwind products either said it was “ok” or “good.”  It was about a 50/50 split.  A few said they rated poor and a few said they were great but overall, it was a solid middle-of-the-road rating.  One survey-taker said of the IMP, “for price point and budget [it’s] a good box for club, garage, weekend bands.”  The Director is almost twice the price of the IMP 2 but did receive three rating of great and zero poor ratings.

Radial ProDI Passive Direct Box (3.1): It’s $25 more than the Whirlwind Director and most people surveyed rated it significantly higher than the Director.  The brand Radial is synomous with “industry-standard”  for a reason.

LR Baggs Para Acoustic DI (3.3): I love mine and by the results, most Baggs owners do as well.  This Direct Box stands out from all of the others because it has a lot of functionality including notch filtering for feedback, a multi-band EQ, and a sweet Presence knob that can make your mid’s so oh-so sweet.  It’s $150 but worth every penny as long as you or the musician who is using it is willing to spend the time on getting the settings right.  One survey-taker said “On my lead acoustic I still stick with my LR Baggs. I’m in love with it. It’s the only active DI you’ll catch me using!”

Radial ProD2 Passive Stereo Direct Box (3.4):  This DI uses 2 custom transformers, one for each channel, for both impedance conversion and isolation. It also uses transformer isolation and eliminates problems such as hum and buzz caused by ground loops.  If you do experience hum or buzz, you should eliminate it at the source but sometimes that’s not an option.

Countryman DT85 FET Direct Box (DT85) (3.4):  The Countryman’s findings showed that not only do a lot of people use it but most of them love it.  A perfect split between good and great.  One professional sound tech said “The Countryman has always been rider-friendly for my ‘C’ level national and local acts.”

Radial JDI MK3 Passive Direct Box(3.6): This passive DI box received the highest rating of all the DI’s.  Sixteen people said it was great and only six said it was good.  From one survey-taker, “I own both a Countryman Type 85 and a Radial JDImk3. I have never been disappointed by either and they have both served me well – completely worth the investment I made in them. My biggest problem with cheap DI’s is that they get saturated when the lows become too much…I’ve never had a problem with my DI’s doing that – and that’s what I got them, so they wouldn’t AND I wouldn’t have to worry about that happening. Sometimes peace-of-mind is worth spending a little more money, especially if it means making money off of what you are buying.”

The survey included an option of other DI boxes / notes.  The follow DI’s were mentioned along with user notes:

There are a variety of active and passive direct boxes.  There are a variety brands.  And there is DEFINITELY a huge variety in the quality of a direct box.  The price point does seem to be a good indicator as it wasn’t until the $75 Whirlwind Director that I saw more than one person rate a DI as “great.”  If you need a high quality Direct Box that can last for a long time, consider what you can get for an extra $25 for the Radial ProDI because the Direct Boxes in the GREEN category start at $100 and deserve every bit of their ranking.

Footnotes
Here is a screenshot of the summary data.

Definition: A Direct Box is an electronic device that connects a high impedance line level signal that has an unbalanced output to a low impedance mic level balanced input, usually via XLR connector.  DIs are frequently used to connect an acoustic/electric guitar or electronic piano to a mixing console’s microphone input. Check out this article for more information on the workings and usage of a DI box.