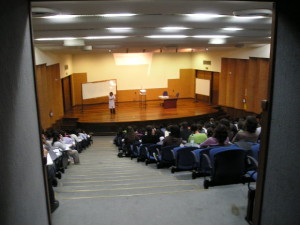 New church techs ask four typical mixing questions and today I’m detailing my responses.  Three of the questions aren’t so much technical as they are situational – but it’s a situation we all face every time we mix.

Make sure to check out the quote at the end of the post – it’s a tip we should all follow.

The answer is, “it depends.”  The ideal volume is like the ideal temperature; it’s different for everyone.  Some like it loud, some soft.  Some want to hear their voices when they sing, others don’t.

The general rules are thus;

Whenever you get a volume complaint, ask two questions; where did you sit and what was too loud.  We dream of even coverage in a room but often this isn’t the case.  Their seats could have been right in front of the speakers.  During the next sound check, visit that spot in the room and compare it to other spots.  It might mean a speaker adjustment is in order or you recommend they sit elsewhere.

Also, if it’s a complaint about the band volume, ask if it’s a specific instrument or vocal.  Maybe your mix was off or maybe they just didn’t like the song or music style.  Every complaint should be reviewed for legitimacy.

See: How Loud Is Too Loud

2. What should I do with the pastor’s microphone mix?

Do something!  Do anything!  I wish I were joking but the truth is new techs spend a lot of time mixing the band but little time mixing any channel used for the spoken word.  Most pastors don’t have a voice for radio so they need a good bit of mix work done.

The primary goal should be clarity of the spoken word.  Imagine a gruff voice, a high voice, a raspy voice, or an overly-nasal voice.  If the person’s natural speaking voice is hard to understand or can in itself be distracting, then do something about it.

Aim to remove sibilance.  Decrease sibilance by focusing in the 3-7 kHz range for males and 5-9kHz for females.  Then focus on mid-range clarity.

A common complaint in small churches is, “I can’t understand what the pastor says.”  This is not about volume, it’s about speech intelligibility.  You want them to sound like who they are – just less so.

See: How to EQ Speech for Maximum Intelligibility

3. Should I use effects?

Only you know the answer.  I’ve worked rooms of the same size with completely different acoustic properties.  One was a very reverberant space while the other had only a little natural reverb.  It comes down to what the song needs, what the room allows, and what sounds good.

I usually add reverb to vocals because it makes them sound more natural.  I don’t do this in every venue, because of the venue’s acoustic properties, as mentioned.  Reverb on acoustic guitars sounds good as well.

Some digital mixers allow for selecting the range of frequencies in the channel that should have the effect.  I don’t want my low ends reverbed and often not the high end.  It depends.

You’re never really done mixing.  For example, let’s say you’ve dialed in the mix during sound check.  During the service, that same mix could be all you need.  However, the acoustic properties of the room change when you fill it with people.  Therefore, a simple mix change could be boosting the lead vocal volume.

Take this a step further and look at what can be done during the song.  Pull back drums during the verses and them let them rock it out in the chorus.  Pull back the lead vocal in the final chorus.  And these are just a few easy-to-implement examples.

What you should NOT do is tweak the EQ settings throughout the service.  A good rule of thumb is to only make changes the congregation would notice.  For example, don’t make a 2dB boost in the acoustic guitar at the 500 Hz range because you think it needs it.  The congregation won’t notice.  Same with minor volume changes.  Don’t mix like you’re mixing in a studio.

See: How to Power Your Mix with Musical Energy

The biggest fear new techs encounter is the fear of failure.  The result is the hesitancy to change an EQ setting or an effects setting.  They’d rather keep the mix as is instead of improving it because the moment they touch the console, they believe they could make it worse.  That, my friend, is just part of the job.

In the fiction book “You Can’t Go Home Again” by Thomas Wolfe, a wonderful line was given that applies perfectly to live audio production; “Make your mistakes, take your chances, look silly, but keep on going. Don’t freeze up.”