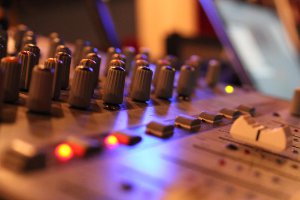 Vital…Propel…Next Level…Can four production tips make THAT MUCH of a difference?  Yes, they can!  The sad part is a good number of people aren’t using these tips and their sound is suffering.

Answer this question; when does the mixing work begin?

Too many techs answer this incorrectly.  That’s where this list of 4 vital tips comes into play.  These are the simple things that should be done, could easily be done, but many times aren’t being done.  Let’s change that.

I’m occasionally pulled into a church to listen to their music mix and make recommendations.  Before the event starts, I check out how the instruments are mic’d.  The wrong mic setup will have a hugely negative impact on their mix.  In many cases, mixing tweaks can’t compensate for the poor mic setup.

Mic’s that are too close to the instrument can produce a distorted signal or a poor sound.  For example, if an instrument microphone was set up with an acoustic piano and the microphone is placed too close to the piano strings.  In this case, instead of capturing the full sound of the piano, the resulting sound is dominated by the frequencies produced by a handful of strings.

Instruments should be mic’d so you hear the best representative sound of the instrument and the least amount of stage noise.  It is the live environment so sound isolation isn’t possible but you do have the ability to get really close.

Oh, and make sure you are using the right microphone.

2.  LEARN TO SET THE CHANNEL GAIN!

Second to microphone location is gain setting.  And gain setting is the second place where I see people make mistakes.  The problem is it’s assumed the GAIN (a.k.a. TRIM) knob is a volume control and from there, it’s easy to mess things up.  Hey, I’m not judging…I used to think the same thing myself.

How do you know if your gain settings are whacked?  Do you hear a lot of hiss in a channel even when the musician is playing?  Do you have feedback issues all the time?  Are your fader controls normally down near the bottom of the fader slot?  If you answered yes to any of these, chances are you have gain issues.

Each channel’s gain should be set so you have the best audio signal-to-noise ratio (S/N ratio).  This means you hear a strong signal and little-to-no electrical noise.

There is a time and a place for bias and this is one of them.

I remember it like it happened yesterday.  I watched the sound guy during the sound check and I couldn’t believe my eyes.  The band took the stage, he set all of the channel volumes at the same audible volume level and then he stopped.  There was no mixing or volume balancing.  It was all singers and instruments coming out of the main speakers at the same volume.

In my complete guide to church audio production, I go into detail on volume balancing and there is even an audio file where I mix instruments all at the same level and then compare it to a properly volume balanced mix.  The difference is dramatic.  Don’t treat musicians equally!

The problem is what you hear and what you think you hear are two different things.  For example, if the band is doing a final song that should sound big with full-on instruments and everyone singing, then you might think you should bump up all of the channel volumes.  But as soon as you do that, your whole mix falls apart because the bass is stepping on the electric guitar that’s stepping on the acoustic guitar and all the instruments are stepping on the vocals.  Taking this scenario as an example, it would be better to boost of house volume so the overall balance of instruments and vocals stays the same. I digress.

How do you learn where musicians should “sit in the mix?”  I’ve said this before but I can’t stress it enough; analyze professional recordings of the song.  So whatever Chris Tomlin song your worship band is playing next week, get a copy of the original and listen to it over and over.  Listen to one instrument through the whole song.  Is it “upfront” in the mix?  Is it more of a supporting instrument in the background?  Imagine all of the musicians on the stage and their location on the stage is based on where you hear them in the mix.  That’s the best way to learn where musicians should “sit in the mix.”

A quick tip on evaluating your volume balance:

Whenever I find significant problems with someone’s music mix, it’s because they messed up in one or more of the above areas.  And that’s where this last point comes in.

The last point comes down to this; no matter how long you’ve been mixing, no matter how young or old you are, there will always be something to learn from another audio tech.  One of the best ways I’ve found of learning is by creating my mix, during band practice, and then asking another tech to show me how they would change it to make it better.

These 4 tips are VITAL because they involve the foundation for all mixing work.  Get the first three right before starting hands-on mixing.  As for the 4th on being foundational,  one must have the right mindset on mixing, learning, and desiring to create the best sound for the congregation.  I’ve seen what happens when pride gets in the way.  It’s not pretty.