A Semi-Parametric Equalizer: The Importance of Using the Right Words 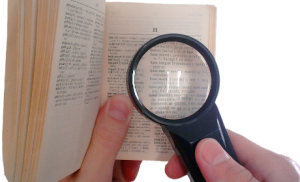 William Spooner, in 1879, placed himself in the history books when he refered to a hymn as “Kinkering Congs their Titles Take.”  He was referring to a hymn titled “Conquering Kings their Titles Take.”  His students, however, didn’t let this slide and in short time, started falsely attributing all sorts of these phrases to him.  “The Lord is a shoving leopard. (loving shepard)” being an example.  In short time, the switching of letters across words became known as spoonerisms.

Most people I know have committed a spoonerism or two.  I just did it this holiday weekend when, instead of saying I “cooked a turkey,” I uttered the words “I turked a cookey.”  While this can create some “milarious homents” for everyone to enjoy, when it comes to working in a technical field, you must be exact in the words you use.

These are not two words that can be used interchangeably. 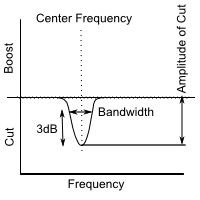 Parametric equalizers allow the control of three primary parameters: amplitude, center frequency and bandwidth*.  These are also referred to as gain, frequency, and Q.

Now that you’ve indicated the primary frequency center and the associated frequency range, you can alter how much of those frequencies in the signal are boosted or cut by altering the gain/amplitude.

(*Note the bandwidth value is derived from the points on the EQ curve that are 3dB above or below the amount by which the central frequency has been cut or boosted. In the case of this chart, it would be above the point in which it was cut.)

A semi-parametric EQ is a parametric EQ with one or more missing features, typically the bandwidth (Q).  Where you will commonly see these is with analog mixers and their mid-range EQ controls.  You’ll see a control for the gain/amplitude and one for the frequency, in the form of a sweep-able control that moves the center frequency and a fixed associated bandwidth.

Saying pemi-sarametric EQ instead of semi-parametric EQ will likely bring some chuckles because the other person knows what you mean.  However, swapping the terms semi-parametric and parametric can lead to confusion and embarrassment.  It’s very important to use the right words when it comes to discussing topics in our technical arena.

Now if you’ll excuse me, I need to make a “cone phall.“