A Shepherd, a Flock of Sheep, and a Homemade Lighting Board | Ministry Essentials 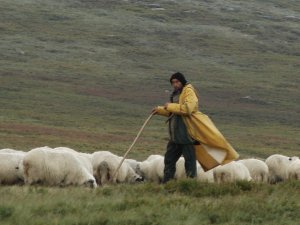 Continuing this week’s series on the Gurus of Tech review, I bring you the insight of Alberty Reyes and Curtis Templeton.  Alberty and Curtis are two people working in God’s kingdom, doing transforming work, doing it in completely different ways, and each embodies the essence of ministering to others.

Did you build your first lighting board from plywood and a couple of dimmers?  Are you ministering to churches in the Dominican Republic so they have trained technical volunteers and make the right equipment purchases?  Meet Alberty Reyes.

Alberty was interviewed for a short period during the Gurus of Tech conference.  And in those few minutes, it was clear that Alberty had a vision and a passion for helping churches in the Dominican Republic (DR).  He also had a great view on technical equipment and how it could bless churches.

Alberty explained that technical equipment in the DR was something that was a blessing to many a church because of the cost of the equipment and the financial constraints of the people.  He started using the bureau concept whenever he would upgrade any equipment at a church.

A bureau is another name for a “chest of drawers” or a dresser.  My socks are in the second drawer of my bureau, just so you know.  Alberty reasoned that when he gets a new shirt and his bureau is full, he needs to take something out.  What do you do with that old shirt that won’t fit in the bureau?  You donate it.

The bureau concept, as he uses it in his production world, works this way; if a piece of equipment is upgraded (added), something else must come out…the older piece of equipment can be donated to another church that could use it. Be it a mixer or a microphone, what equipment do you own that’s being sitting in a drawer or a box and could be used to bless an unfortunate church?

Curtis Templeton is known as one of the guys who helped start Gurus.  He’s been in full-time tech ministry, he’s worked as a church planter and as a worship leader.  He currently serves as Connections Pastor at First Christian Church in Huntington Beach, Ca.

Curtis tackled a topic that I’ve recently written on myself; ministering to your team.  His father is a pastor and one day, it was his father’s words that made it clear that tech leaders are to minister to their team.

One of the people on the tech team had come to Curtis saying, “We need to talk.”  Simplifying the story, this long-time team member and his girlfriend were expecting a child.  He’d told Curtis that he knew he’d be pulled off the team and there would be ramifications for his behavior.  Templeton wasn’t sure what to do.  He said, “Give me a week.  I need to think about this for a while.”  He asked his father what he should do.  His father said, “Whatever you do, just be his pastor.”

What does it mean to be a pastor?  It means taking on the role of a shepherd who watches over their sheep.  Templeton outlined the three ways shepherds tend to their sheep;

1. A shepherd has to be with their sheep.

“You need to smell like them,” he said.  Working in any type of leadership role, it’s easy to put distance between yourself and those who work for you.  A shepherd tends to his flock by walking among them.  You can tend to your volunteers by working alongside of them.  You can teach them, mentor them, work beside them, and walk among them and encourage them.

Did you know that different shepherds can bring flocks of sheep together and still leave with their own sheep?  The sheep recognize their smell and the sound of their voice.  They know who to follow.  They know who is leading them.

2. A shepherd is committed to their sheep.

He said, “Sheep are not a resource, they are our purpose.”  Let’s park here for a moment.  Ezekiel 34:2-5 says, “Son of man, prophesy against the shepherds of Israel; prophesy and say to them: ‘this is what the Sovereign Lord says: Woe to you shepherds of Israel who only take care of yourselves! Should not shepherds take care of the flock? You eat the curds, clothe yourselves with the wool and slaughter the choice animals, but you do not take care of the flock. You have not strengthened the weak or healed the sick or bound up the injured. You have not brought back the strays or searched for the lost. You have ruled them harshly and brutally. So they were scattered because there was no shepherd, and when they were scattered they became food for all the wild animals.'”

Your volunteers are not a resource.  They are not a “group of volunteers.”  You don’t have a lighting tech; you have Bill, who is your lighting tech.  Get my drift?  You can’t commit to your sheep when you only see them for what they do, not for who they are.

Commitment includes protection.  John 10:7 states, “Therefore Jesus said again, ‘Very truly I tell you, I am the gate for the sheep.'”  You can protect your volunteers by dealing with criticism from people in the congregation, be it issues on haze or volume or whatever.  But they must also feel protected.  Do they know you watch out for them? Do they know you have their back?  Shepherds endear themselves to the flock.

3. A shepherd is available to their sheep.

“Take Up the Staff”

Curtis’s final words…“take up the staff.”  A shepherd is often recognized by the staff they carry.  A ministry leader needs to be a minister to those who work for them. It’s not enough to be the leader of a team.  Your team needs a leader, for sure, but they also need someone who will minister to them.  Take up your staff.

Alberty, Curtis, You, and Me

This week, I’ve covered having a heart for production work with Todd Elliot, preparing for a thriving ministry life with Lincoln Brewster, and being bound together and with Christ with Steve Carter.  Heart issues.  Today, you read about Alberty Reyes and his heart for the churches in his country.  You read about Curtis and his call for leaders to be the shepherds of their flock.  More heart issues.

But this is Thursday.

There is one day left in this week.  One day in which I’m going to try explaining why I love working in church audio production.  My desire is that it will help my family and friends understand my work in a different light and that it may help you put words to what you’ve always thought or believed but could never find the right way to say.

P.S. A flock of sheep is also known as a herd.  And yes, I’ve heard of sheep.  I’ve also heard a shepherd’s staff is called a crook but I don’t want any crooks in my church!  (Father forgive me, for I have punned.)