Acoustic Guitar Distortion and Other Wacky Stuff that Works 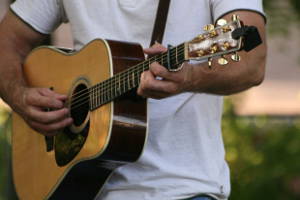 Judge not lest ye be ready to hear the result.  Whether it’s microphone placement or mix choices, there’ve been times where I thought, “that guy doesn’t know what he’s doing.”  But then I heard the result.  The last newsletter covered low passing drums.  There are a number of other non-traditional methods that get some good sounds.

That’s right, I added distortion to an acoustic guitar – rhythm, mind you.

We usually run a full-size band of seven-to-eight people but this day we were short a few, including both of our electric guitarists (usually one rhythm and one lead).

One of the songs needed that grungy electric grinding in the background.  Otherwise, with what we had on stage, the song fell flat.

I didn’t add a ton of distortion because the sound should match up with the band as much as possible. But I did add it.  It wasn’t enough to destroy the natural sound of the acoustic guitar but it added enough of that backfill grunge to get me what I needed.

I’ve seen this story pop up from a few people recently and I’ve experienced it myself.

Traditionally, we’re all taught (and we teach) that a guitar amplifier should be miked with the microphone at some point between the amp speaker’s center and the outside rim – adjusting for where it gives the best sound.

The last place to put the mic is the very center – in front of that voice coil/dust cap.  But, you know what? Sometimes that placement gives the BEST sound.

I’m not saying you should always do it that way.  However, if you aren’t getting the sound you like from the traditional miking method, give it a try.

This one’s new to me but it makes perfect sense.  Drum miking means we have to deal with the whole bleed between the snare and the hi-hat and try to minimize it.  Not that all bleed is bad.

James Cadwallader says, “Some time ago, I picked up the method of turning a small diaphragm cardioid condenser nearly horizontal above the hi-hat and pointing it away from the snare.  Having the snare in the “nulling area” of the mic’s polar pattern is very effective in reducing bleed.”

He said when another tech would come in, it’s the first thing they would want to change – because it didn’t align with their traditional thinking about drum miking.

It’s very easy to set up the stage and mix like you’ve been doing for years.  And that might get you a really good sound.  Now step out of your comfort zone and look for non-traditional methods to everything from miking to mixing.  Maybe you have a number of “ah ha!” moments.

The Next Step
Another method to get a better sound is through adding more power and energy to the mix. Check it out below: