Add Power To Songs With These Volume Tips 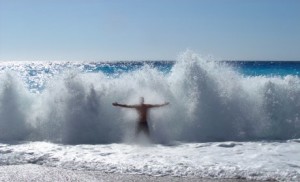 The power of a song is like an enveloping wave.
Photo provided by storm11080

The two biggest mistakes I see sound techs make are when they tweak the mix during the ENTIRE worship set and when they NEVER touch the mixing board during the worship set.  There is a time for active mixing and there is a way you can use it to bring power to a song.

Volume balancing is one of the early steps in forming your mix during the sound check.  You are layering the different sounds using volume differences for placing the sounds in the mix.  For example, you push up the volume of the worship leader’s acoustic guitar and you pull back the volume of the backing vocals.  Using the right pushing and pulling of volumes, the instruments and the vocals are in proper relationship with each other.

Once the volume balancing is completed, the next step is using EQ controls and adding effects.  By the time you have mixed each song, you have a distinct mix that’s ready for the church service.  The mix is ready, but it’s not the end.

Mixing for the Moment

There are many ways you can do active mixing, from changing effects for the vocals on a chorus, to making EQ changes to a guitar during the bridge of a song.  This is where you can get creative with your mixes…as long as the result is still something that benefits the congregation.  The key is finding the mix changes that go with the changing, moving feeling that is the worship set.

The level of active mixing to which you go, per song, is up to you and how comfortable you are with making these sorts of changes.  However, there is one area where ANYONE behind the mixer can make creative active mixing choices; volume.

There are a lot of ways you might alter volume during a worship set.  Here is a short list you can use as a starting point.

There are many ways you can use volume changes for active mixing.  Take some time during the next rehearsal for testing out mix changes within a song.  See what works and what doesn’t.

The worship band can produce a powerful worship set.  You have the ability to take that one step higher.  You can add power to a song by adding volume in the right way and taking away volume in the right way.  Please, whatever you do, don’t be afraid to fail.  That is to say, you should take time during rehearsals for experimenting with those mid-song changes.  Failing is the only way you’ll know what to avoid.  Besides, you are doing this during the rehearsal and this is your only time to practice.

There’s an ART to get the right overall volume in your church. Check out this post for more information on how you can do that: