Are You Working Heartily, As For The Lord? 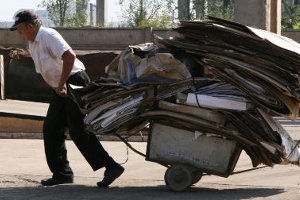 This cart isn’t moving on its own.

I enjoy watching a good television show from time-to-time.  For the most part, I watch two shows; Doctor Who and Castle.  Castle is a detective show with a twist; Rick Castle.  He’s a popular fiction writer who, because of his friendship with the mayor of New York City, is allowed to be imbedded with a team of police detectives. But I’m not here to talk about the show.

A few days ago, a television station was airing two old Castle episodes in a row.  I caught the last 10 minutes of one and then a full episode after that.  And it’s the second episode where life got interesting.

I can’t hear you

The first show ended and when the next episode began, the audio volumes for the vocals were almost non-existent.  During this entire episode (yes, I watched all of it), I couldn’t hear the characters but what was “clear and upfront” was the music and the sound effects used throughout the show.

Ah yes, the words of my wife.  It was easy to watch.  The reason was because there is more to a show than the words.

Watching a television show, you focus on the main characters and what they say.  Take away the words and I ask you, can you still understand the story?  Most definitely.

This does relate to audio production, bear with me a moment longer.

Peeling back the spoken dialog was a way to see what supported the words.  What made the scenes seem real and assisted in telling the story?  It came down to the cinematography, the audio effects, and the music.  I was able to watch the whole show and know what was going on ONLY because of these three parts.

Peeling back more, if I could, I would have pulled out the audio effects.  These would be the sounds of the street noise, office sounds, emphasis added to a scene like a loud WHACK when a person slammed their fist on a desk, that sort of thing.  But the music…you can’t take away the music.  The music supports a scene.  The music foreshadows an upcoming event.  The music re-enforces the dialog and adds to the storytelling.

Now we can talk audio production

I’ve been around long enough to hear more than a few statements that made me shake my head.  One of those statements came from a person who believed you didn’t have to do anything with the instruments in the band.  They didn’t bother with the EQ because “the congregation only listens to the worship leader.”

…then you’ve fallen into the trap of legitimizing mediocrity within the church walls.

A significant part of your job is providing an environment conducive for worship.  This means you do everything within your means to create a wonderful worship music mix.  And here is where I expect a bit of an argument.  “As long as people are singing then it doesn’t matter.”  Sorry, that logic doesn’t work.  I’ve seen it myself and I’ve heard it from other techs…when you improve the quality of your audio production, the congregation will become more involved in the worship.

Worship is more than singing.  Real worship requires the complete involvement of mind, body, and soul.  Your congregation can’t do that when you are giving them the least of your efforts.

Col 3:23-24 read;
“Whatever you do, work heartily, as for the Lord and not for men, knowing that from the Lord you will receive the inheritance as your reward. You are serving the Lord Christ.”

Just to make that clear:

Are you working heartily, as for the Lord?

I hope you are, I really do.