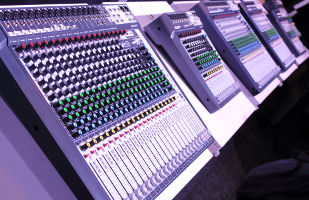 It’s time to look back at the trends, innovations, and overall audio gear that’s come out in 2015 (or is worthy of the spotlight).  There’s a lot of great gear, decent gear, and crappy gear.  There are cool gadgets and gadgets that only look cool.  Here’s the list of what we think’s worth consideration.

Along with myself and Brian, Beau Brown and several other techs have contributed their thoughts on this list and are noted below. I should note each category below may have more than one listing because we didn’t want to filter it down to one.

Trends of the Year

This year has seen the release of more sub-$10k digital consoles than any other year.  DiGiCo jumped in with the S21, then we have the Yamaha TF-series, the PreSonus RM32ai and the evolving Allen & Heath QU-series initially released at the end of last year.  And let’s not to forget the iPad-based consoles.

Accessory of the Year

Sometimes simple is necessary.  Be it for a portable church or not, a massively long analog snake sometimes doesn’t work.  These mini-snakes enable four or so XLR cables to be plugged into a device which converts the signals to travel along a single Cat-5 cable and then is broken back out into the four or so XLR connections.  Some can also be used with Ethercon.

These are available from Rat Sound (Cat Tails, Cat Rack, and CatSnake line) as well as Radial (Catapult).

Innovation of the Year

Carrying along with the trend of the year, the nDrive allows for easy multi-track recording and playback directly via their device, avoiding the whole PC/Mac debate and DAW software.  Starting at $499, based on memory size, this little box makes virtual soundchecks a piece of cake.

Per their web site, “During recording and playback you can create markers that allow you to jump from song to song with ease. This will make dialing in that vocal or snare way easier than trying to do it live or during rehearsal. [Also] All 32 tracks are recorded to the removable SD card and can easily be transferred to your computer if you want to mix down a session at a later date.”

This is a piece of gear meant for a specific situation.  I could argue for this just as quickly as against it. I’ve been at churches where the techs do a good job and the virtual soundcheck option would be well-received but the idea of presenting them with a computer and software DAW would be too much. This would be ideal. But then I’ve also been at places where they would gladly step into a computer for virtual soundchecking and should pass on the nDrive.

The nDrive presents a solution (opportunity) for a specific situation. Is it right for you? It is if your church would benefit from it. And honestly, I’ve seen some really small tech booths too small for a dedicated audio PC so this would work in that situation as well.

There are a lot of good consoles in the sub-$3500 range but among users, the biggest fans tend to be the Qu-32 users.  The Qu-32 offers darn near everything one would want from a digital console including a touch screen (though a bit small for Chris’s taste). Beau Brown, audio engineer at Redeemer Church (Ponte Vedra Beach, Florida), says “The Allen and Heath QU 32 is another very user friendly console [and I’m] honestly surprised by how much I like the QU consoles.”

Brian, Beau and many others love the Qu-series but for my console of the year at this price point, I opted to go the analog route, yes analog.  There are venues, from churches to conference facilities, where digital consoles are too much for the needs and sometimes too much for the volunteers.  The Signature-series offers multi-track playback and recording.  At only $800 for 22 channels and $450 for 12 channels, that’s a sweet addition.  I just wish the larger board had jacks in the back instead of the top.

Running audio in places that don’t warrant a digital console, it’s great to have that virtual sound check capability.  I’ve found the smaller the venue, the less time (if any) is spent in practices so if the audio tech only gets one shot at mixing a song on a Saturday morning, at least they’ve got time to work on that mix.  It will also drastically improve their mixing skills.

Beau says, “I’ve always been a Yamaha guy and think the QL and CL consoles are really great given the familiar Yamaha work flow and upgraded effects. I’ve been using a GLD80 a lot and, console surface aside, I really like the functionality. The ease of use, excellent recording functions and digital snake have made me appreciate it a lot lately. [However] A staple in this range is the Avid SC48, which is my current go-to console! I really love the power and overall professional workflow. For me the SC48 is a medium scale powerhouse! Between plugins and the routing/recording/programmability I’m always happy to see an SC48!

Once you start talking high-end consoles, DiGiCo and Avid will come up time and again and either would be a winner depending on your needs.

Remote Mixing Console of the Year

Through 2015, I’ve been able to play with remote console systems.  These are made up of an I/O box, usually kept on stage, and some form of tablet-oriented software, either as an “App” or via a web browser.  Some require use of an existing Wi-Fi system while others create their own secure Wi-Fi access point.

I’ve found the layout of some I/O boxes to be bizarre and the reliability of some boxes to be questionable.  I’ve also found the software to be hit or miss.  In one case, I wondered if the designers had ever used mixing software.

The console that stood out was the Mackie DL32R.  Reliable, with easy-to-use and very responsive software.  For many years, Mackie was seen as a lack-luster brand but in 2015 they released a few products that’s brought them back in the spotlight.  Additionally, the DL32R has been nominated in the category of Small Format Console Technology for the 31st annual NAMM Technical Excellence and Creativity (TEC) Awards.

The Heil PR-35 is a dynamic cardioid vocal microphone with a low-cut roll-off switch. While it’s a dynamic microphone by design, it’s level of nuanced sound detection has quite a few people saying it’s a dynamic that sounds like a condenser.

For me, Chris, I think the best sub $300 investment is in a pair of choir microphones. Choir mikes are the most under-rated yet necessary microphone around.  They work to mic a choir (duh), mic the congregation (important in recording and live-stream), and are great for in-ear systems to enable the musicians to feel they are part of the room.  In-ear isolation is great but a common musician complaint is they feel removed from the congregation.

The AKG C414 XLII isn’t your normal stage microphone.  It’s a large diameter condenser with variable polar-pattern control that works great with a soloist or even a quartet.  It’s not every day that some of us need such a microphone but when we do, it’s great to have one like the AKG C414 XLII.

I need to pause for a moment. In this $300+ category, I asked members of the Behind the Mixer Facebook Group for their opinion. (Sign up for the checklist below to join the group). There are so many microphones, I wanted to know what people liked across all scenarios (wireless, instrument, vocal, it didn’t matter). I’ve culled down the responses to a handful that were popular among the group:

IEM System of the Year

A great IEM system is one that meets the needs of the musicians.  I’ve looked over many IEM systems and while a handful are similar most tend to fit a niche.  One can do multi-track recording and playback, another offers support for two musicians from the same box, another is simple and another complex.  The AH ME-1 is a good all-around system but if you want to see how options vary and who would benefit, watch for my upcoming Personal Monitor Mixer guide.