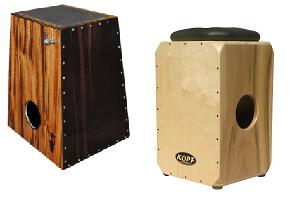 A cajón, pronouced ka-hone, is nothing more than a wooden box.  And while a percussionist is whacking away at the exterior, there is a whole lot going on both inside and out.  Through the right miking combination, you can create a cajón mix with great mid and high end sounds as well as substantial low end. In the right circumstances, you’ll get the sounds of two instruments.

For the outside, I use a Shure PG81.  This cardioid condenser is placed about a foot away from the front of the cajón.  This enables the capture of the percussionist’s hands slapping the cajón as well as picking up any additional percussion pieces on the floor, such as a foot-tapped tambourine.

For the inside, I use an Audix D6 dynamic cardioid kick drum mic.  By placing this on a short mic stand, I can place it well inside the rear sound hole.

The mix is determined largely by the other instruments.  For example, if I had a cajón with a full drum set in the song arrangement, I’d have skipped the inside mic altogether.  But when you get a stripped down acoustic set, then the fun begins.

Start by rolling off the low end frequencies of the exterior mic.  I’ll dial in my high-pass filter to around 200 Hz.  The reason is my interior mic is used for the low end and it’s those mids and highs I want from the PG81 mic. From here, modify the sound and make those slaps really pop out.

The interior mic mix is more about sculpting the desired sound.  Try a nice 6 dB boost between 40 Hz and 100 Hz until you find the best spot.

It’s all about the bass…

Depending on the instrument arrangement, the cajón can work in different ways.  In a set last weekend, it was two singers, one acoustic guitar, and the percussionist.  By boosting the volume of the interior microphone, I created a solid bass line in the song that complimented the arrangement.  In a way, by using two microphones on the cajón, I’d created another instrument.

For all of the complicated parts of mixing, there are just as many simple tricks.  One cajón plus two microphones yields two instruments.  That’s math I can use.

P.S. Cajóns come in a variety of shapes with differing sound hole locations.  Use the above as a basis for setting up microphones for your situation.