Got Guitar Amps On Stage? You Can Control Them! 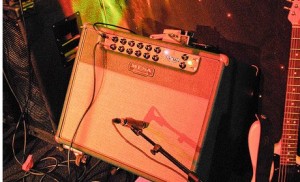 This simple setup is all it takes.
Photo provided by art-sarah

Guitar amps, on the stage, can be a burden for the sound tech.  They can be too loud and even blast out the people who are in front of the guitar’s amplifier.    You can take control of these stage amps and still meet the needs of the musician.

Getting a handle on stage amps isn’t too hard as long as you keep a few things in mind;

The tone of their instrument is picked to meet the needs of the song or the preferred sound. An electric guitar patched through the sound system won’t have the same sound as if it was run through their amp.  Guitar amplifiers have tone controls and even the make and model of amp has its own tonal characteristics.  This isn’t to say guitarists should always use amps on the stage.  They can get a lot of tonal controls through pedals and pedal-boards.  My point is you need to respect their decision on the importance of tone.

Guitarists, who know what they are doing, will have some sort of amp stand or other means of pointing their amp up at their head.  This is what you want.  If they don’t, you’ve got a bit of work to do because, in those cases, the amp is usually pointed at their knees.  Last I checked, my knees didn’t have the ability to hear sound. Pointing the amp at their head also means less volume is required.

Talk with the musician about angling the amp towards their head. If they question this idea, ask them to play while you point the amplifier at their head. They should be on your side in no time. The proper amplifier angle can be achieved using a commercial amplifier stand or, if you need to get a little creative, one can find free blueprints on the internet for building a cheap custom amp stand. Once the amp stand is in place and pointed properly at the guitarist, have the musician set the amp tone so it’s how they want it.

Note the tone of the amp sounds differently when you are in front of it versus to the side.  In the case of musicians who have been using the wrong setup, they will need to change their tone settings because now, for the first time, they are on-axis with the amp’s speaker(s).

Using the proper self-monitoring setup as described above, the musician doesn’t need the same level of volume.  This means you get volume control. It’s time to grab a microphone.

Proper on-stage amp usage is about directionality, proper microphone placement, and on-stage volume control.  Respect the musician’s views on amplifier tone and their needs for self-monitoring.  A common question I get via email concerns controlling guitar amps on the stage.  You can do it.  It just takes a bit of time and the willingness to talk with the guitarist.

Question: What problems have you had with guitar amps on the stage?