The Next Microphone You Buy Could Be Counterfeit – Spotting Fakes 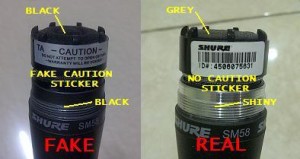 The Shure SM58 is the most popular counterfeit microphone on the market.  You might own one.  Sennheiser’s have been faked.  Even rack components are being faked now.  Here’s the kicker, in some cases, the fakes are being sold at the same price or higher than the authentic products!  And the fakes are getting harder to spot.  Consider these ways of spotting a fake microphone.

I’m focusing on the Shure SM58 but the concepts apply to all microphones.

Shure has a “Minimum Advertised Price” policy.  That’s why SM58’s should NOT be advertised for less than $98.  If you see them for less, they will be used or fakes.  Buying from a local music store, you might haggle them down in price but they can’t advertise it for anything less than $98.  Know the retail price of the microphone you want to buy.

I’m not saying all SM58’s on eBay are a fake.  But for the affordable price of a new one, why risk it?  New fake Shure SM58’s and even the lower-end Sennheisers are being produced in China.  Those new microphones, albeit fake, will be listed as NEW on eBay.  They might be cheaper, they might be the same price, or they might be more expensive.  Avoid any new microphone on eBay from a non-authorized dealer (if their eBay handle is like “PookieBearLovin” then they aren’t an authorized dealer no matter what they say.)

And before I get a letter from someone, including PookieBearLovin, who sells new authentic microphones on eBay, let me say this; it’s nothing personal, but I don’t want my readers questioning their purchase.  Authorized dealers are the way to go for any new microphone purchase.  Sweetwater.com, CCISolutions.com.  You get the idea.

Check out the SM58 differences;

4. Look at the packaging.

The packaging should include a SHURE sticker, a cable tie, and a black microphone bag with a “made in China” tag.

5. Be careful of any microphone sold by a non-authorized retailer because the above points aren’t enough.

Rich, from ProSound Ltd, said, “There are now only 2 ways we know of to identify a genuine mic and it would be stupid if anyone shares those on an open forum like this because the fakers are not dumb, they search the net and find those things out and then just change the fakes to seem more genuine!”

A fake SM58 sounds bright and harsh when moderate gain is applied. A genuine 58 will sound smooth in the lows and mid-range, with a slightly recessed and pleasant high end.

Beware of counterfeit microphones. A cut-rate price is…worthless.
[tweet this]

1. Only buy new microphones from respected authorized dealers.  Wish I could find the photo I saw that showed twenty different fake microphone boxes in the back of a box van.  [sigh]

2. DON’T BE BULLIED INTO MAKING A FAKE MIC PURCHASE.

I’ve read your emails.  I’ve heard your stories.  The situation goes like this; you create a list of gear needs, give it to the church board for approval, then someone on the board decides to look on the internet for a “better price.”  Here comes their email with links to eBay listings of new microphones for a fraction of the price.  Educate them.  Enlighten them.  But whatever you do, don’t give into them.