The Dangerous Wall of Sound 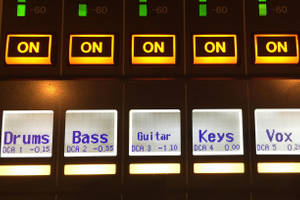 The wall of sound is created when every channel in the music mix fights for sonic space and no one wins.  Imagine all the channel volumes are equal so there’s no spatial separation in the mix.  The bigger the band, the easier this can happen.

This wall of sound mix happens for a few reasons:

Notice I didn’t directly blame the band with point number one.  They know how it’s supposed to sound and likely base their arrangement on a well-produced mix.  However, when everyone plays “all in” on a song, your mix work needs to account for that combined energy and balance it out.

Point number two needs some explaining.  A music mix requires balance of areas that include volume, effects, and EQ so every instrument and vocal supports the song.  For example, you can’t crank the bass on a song that’s primarily lead by an acoustic piano.  You can have the bass at a lower volume, with just the right settings to provide the bassline without getting in the way of the piano.  But, this is only two channels as an example. This balance needs to span across all channels.

You can accidentally create a wall of sound – I know, I’ve done it.  It goes like this.  You get a general mix sounding pretty good and then decide the electric guitar needs a volume boost. Then you think the bass might need a boost.  But where did the keyboard go?  Boost that.  Next thing you know, everything is loud.  Those are times when EQ changes might have been a better solution.  I’ll cover that in a minute.

What to do with a Wall of Sound

The best way to avoid it is to plan for it.  Know how a busy song should sound and mix accordingly.  If you’ve attempted to do that and still get the wall of sound or the arrangement calls for changes mid-song and you are suddenly hit with it, follow these steps:

1. Pull back instruments that aren’t key drivers in the song.

I’m not saying to pull them out of the mix.  This volume change will be the most dramatic fix to the wall of sound problem.  Also, feel free to pull back all the volumes, if during a practice or sound check, and then carefully add channel volume back in.

There are two options for this:

2. Listen for competing sounds and cut where necessary.

Common competing sounds are bass and kick drum.  Also two electric guitars.  Pick the instrument which sounds best in that frequency range and apply an EQ cut to the other instrument in that range.  As a tip, first check that you aren’t boosting the frequency in both instruments – I’m guilty of that one.  By using the frequency cuts, you can get a little more volume out of an instrument that might fall too far back in the mix.

There might be a time when you want to raise the volume of the band.  Don’t use the individual channels.  Use the main mixer fader which then keeps the balance.

The “Wall of Sound” can happen to anyone.  Listen for it and use volume and EQ changes to alter the mix when it does happen.

The Next Steps
Want to take this to the next level? Check out the below article on the simple way to build a music mix. Or, really step it up and get the full guide so you can create a great music mix every time.