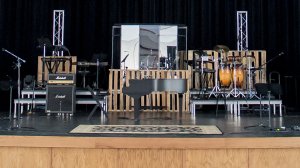 “We don’t practice until the morning of the service.” “We have a mid-week practice.” “Practice?  I get a five-minute sound check and that’s it.”  I’ve heard from audio techs the world over regarding their weekly practices / sound checks and it usually falls into one of those just mentioned.  It seems time I detail how my church goes through our production routine.

I’ll note that I’m not sure on the timing on the video and lighting behind-the-scenes prep work like programming the lighting scenes.  This will cover what do know.

This is our mid-week practice in which the worship band practices all of their songs.  Consider this the FIRST practice.  They’ll work on the overall songs, timing, problem spots, etc.  From a production point of view Steve or I will have all the equipment on stage and running.  Microphones, in-ear monitors, everything.  This is a great opportunity for us to set our channel assignments, channel gains, and dial in a rough mix for the overall band. The band also sets their in-ear monitor mixes.

I say “rough mix” because sometimes things will change.  The electric guitarist might change to a better patch for his sound on Saturday.  There might be a musician who can’t make that practice.  It’s rare, but it does happen.  Also, the band might not really gel as far as their overall sound and arrangement changes are a possibility.

We run the M7CL so Steve and I can save a generic scene for the Saturday practice.

We run three services; one on Saturday evening and two on Sunday morning.  Our Saturday begins around 3:30 pm with musicians coming in for practice around 4 pm.  Consider this the second practice.

The second practice is when Steve or I mix for each song, save the scene, and then mix for the next song, save the scene, rinse, repeat.  This is where it’s handy to have that generic scene from Wednesday night to start as a baseline.  Often, it’s a generic scene with all of the channels cleaned up but nothing much after that.  By the end of this practice, our scenes are set and we are ALMOST ready to go.

At this point, camera op’s take their positions, the lighting tech is in place, and the production director takes us through a full run-through of the service.  The band plays all of their songs, we have a stage manager perform mic checks on most of the speaking microphones (elder, announcement microphone) and the pastor will come out of a few moments for a quick mic check.

During this run-through, from an audio point of view, it’s rather easy.  Scene change, scene change, etc.

During this service, just like the first Sunday morning service, Steve and I can make any mix changes and if we deem it of value to keep, we’ll save those changes in the scene.  This way, we aren’t making the same changes for each service.

Sunday morning, before the first service, we do a quick sound check with a few songs, and we are ready.

Not quite.  I’ve had people say our level of practice is more along the lines of what they’d expect for a professional performance.  What they are really saying is “I think your worship band performs instead of ‘worships.’“ To that point, two things;

So that’s our typical week as far as what we do from an audio point of view.  I’ve never questioned the amount of time we spend prior to the first service because the moment the first service starts, I know the musicians and the full tech crew are fully prepared.  And that’s a really nice feeling to have.