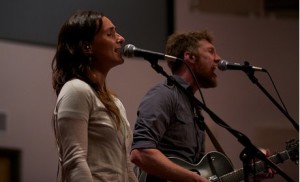 You might be suffering from all three of these audio feedback problem areas.  I’ve been emailing a sound tech overseas who has had feedback problems.  In my initial email, I said it could be caused by one of a few things.  As it turned out, he had all three conditions that were causing feedback.  Let’s get it work…

Feedback is caused when a particular frequency becomes excited and is thus astronomically amplified causing the screeching and howling sounds.  Reminds me of Halloween. But seriously folks….the feedback usually occurs when a sound is loud enough to be amplified by a stage monitor and then picked up by a microphone and gets into an amplification loop.  In this loop, the amplified sound gets louder and louder until…

1. Place microphones in the right relationships to loudspeakers and monitors.

In the case of my overseas friend, his church setup had the pastor’s vocal microphone out in front of the house speakers.  While such a scenario can work without having feedback, it’s a scenario that’s much more likely to experience feedback.  This is especially true if the pastor moves the microphone or turns in a way that his/her body is no longer blocking sound between the house speakers and the microphone.

Regarding floor monitors, vocalists should be very close to their floor monitor.  The monitor volume should be loud enough that the musician can hear it but not so loud that the microphone picks up the sound when they are holding it up to their lips.

2. Teach musicians to use the proper vocal microphone technique.

*Tip: If you have more than one person talking into the same vocal microphone during the service, make note of their natural speaking volume level.  This way, when they walk up to the microphone, you can lower the fader before they speak those first words.

3. Use the proper gain setting technique.

Setting the channel gain for any sound source, you want the clearest strongest signal.  You want the best signal-to-noise ratio so that the sound, such as the singer’s voice, is stronger than any line noise that might exist.  However, you don’t want to allow for so much gain that you allow for feedback in the system.

An easy way to get the best signal-to-noise ratio is by using the “gain-before-feedback method” of gain setting.  As you turn up the gain, with the fader at 0, turn it up until you get feedback.  Then turn down the gain a few notches.  Personally, I set the fader at zero and turn up the gain until the sound is about at the volume where I want it in the room.  But if I do experience feedback, I know to turn back the gain.

If you find you are having more than your share of feedback during an event, consider more than one issue might be the problem.  Feedback prevention comes down to placing microphones in the right relationship to monitors and loud speakers, ensuring that microphones are as close to the sound source as possible, and that you are sending the right amount of the audio signal into the mixer.

One last very important piece of information.  As I told my class on Saturday, the entire sanctuary is your responsibility.  This means everything from the stage to the sound booth.  The next time you experience a feedback issue and are asked about it after the service, don’t place blame on someone else or some piece of equipment.  Take ownership of it, apologize for it, and do what you can to prevent it from happening again.