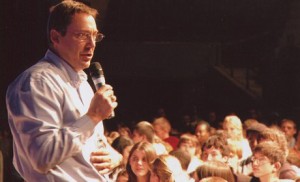 People came to hear the message
so enable them to understand it.
Photo provided by amslerpix

There is a huge advantage of mixing music over mixing speech; you can blend sounds when mixing music.  That is to say, if you have one instrument or vocalist you can’t quite get right in the mix, you always have the other instruments and vocals to fill in and blend in with that particular problem channel.  When it comes to mixing speech, i.e. the pastor’s voice, you don’t have that benefit.

Consider these eight tips for mixing the pastor’s voice and improving the clarity of their voice.

BEFORE TOUCHING THAT KNOB!

The below are general tips.  I’m not saying to do all of them together.  I’m not saying each one is right for the particular voice that’s being mixed.  Much of the mix work depends on the frequency characteristics of the voice.

Note the order as the tips build upon each other.

1.  Before doing anything, think about the pastor’s voice as that’s your foundation.  I worked on EQ’ing a vocal that had a lot of low-end in the voice but also, surprisingly, had a noticeable amount of upper mid-range frequencies.  Therefore, a wide mid-range boost made their voice sound worse.  It wasn’t until applying a massive cut under the 350 Hz range, a narrow cut to a lower mid-range area, and a narrow boost to the upper mid-range that their vocals obtained the desired clarity.

3. Cut before boosting.  A vocal will often have too much of something.  Resolve issues with those “too much” areas before focusing on improving clarity via boosting.

4.  Use a high pass filter (HPF) for dropping out sounds below 80 Hz.  While a male’s voice *might* have frequencies in that low of an area, it’s nothing that’s going to help their clarity.  Start with your HPF around 80 and slowly increase it up to the 125 Hz range. Wherever you find a noticeable change in clarity is the spot you need.

6.  Add warmth to the vocal.  A voice can sound clear but have no feeling behind it.  This can happen with a voice that’s crystal clear but have little to no low-end.  Add a 3 dB bump in the 160 Hz to 400 Hz range; lower for men, higher for women.  Beware that low-end frequencies can also muddy up a voice so be careful.  If you add a bump in this range and it doesn’t sound right, take it out.  It might be a cut in the mid-range is more what is needed.

7.  Remove sibilance.  Sssssssibilance in vocals is when the sound of the letter “S” sounds more like a hissing snake.  You can accentuate vowel sounds / add presence by increasing the EQ in the 4,500 Hz to 6,000 Hz range.  However, the “S” sound lives between 5 kHz and 7 kHz.  Therefore, be careful when adding presence because you can easily go from a great sound to a hissy sound.  A de-esser can be used for dealing with sibilance but I prefer first trying EQ changes.

8.  Avoid distortion by adding compression.  A pastor who is known for suddenly talking significantly louder is one that would benefit from compression.  The problem with those outbursts is theycan cause distortion or simply the voice takes on different frequency characteristics as it gets louder.  A compression ratio in the 2:1 and 3:1 range would be helpful.  This way, their volume stays within a reasonable range.