Gurus of Technology in Review 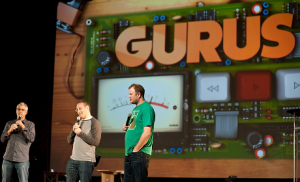 Say it with me, “I will attend the next Gurus of Technology conference.  I will be in community with other church techs.  I will be spiritually fed.  I will conquer all in the Tech Olympics.”

Personally, I had an amazing time at Gurus and it’s left me somewhere between “speechless” and “blabbering to my wife like a fool.”  With that in mind, if you attended gurus, this article will be a walk down memory lane.  If you didn’t attend the gurus of tech conference, you’ll know what to expect when you do go.

What exactly “IS” the Gurus of Technology conference?

Gurus is a celebration of every person working in the audio, video, and lighting (AVL) world of church production.  You will be in community with fellow tech’s where you can learn cool techie stuff, share your war stories, and learn where God and your walk with Him fit into all that you do.

The conference is organized with a rotation of a technical breakout session, a keynote speaker, and games and giveaways.  At least, that’s how I remember it…it’s kind of a blur.  Yeah, it was THAT good. 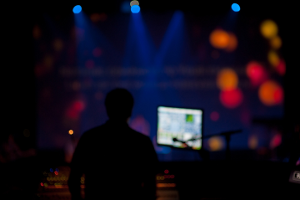 Driving down to Louisville, Kentucky for the conference, I hadn’t thought much of how spirituality would play into the conference.  AVL people…in one room…it’s going to be geek-speak for three days…right?  I couldn’t have been more wrong.

The first night of the conference, we were treated to a great time of worship.  Full band.  Full light production.  Video work as well.  Full on.  Then came the last worship set.  One singer with a guitar.  Standing in a spotlight.  Video screen with a black background and only the white text of the song lyrics.  Complete…total…worship.  Nothing to critique, nothing to cause you to say “I should remember that cool effect.”  Just worship.

The conference had a back-and-forth weaving of the technical and well as the spiritual.

The keynote speakers were

Danny Yount.  He is one of the top main title designers for film and television and works for Prologue Films. He has won an Emmy for his concept, design and direction of the opening sequence of HBO’s Six Feet Under.  He’s also known in the field for his title sequences for Kiss Kiss Bang Bang and Sherlock Holmes.  He’s also worked on the Iron Man movies and Tron Legacy.

Danny walked us through his creative processes and many of his demo’s and final reels from his popular works.  He also provided an insightful look at the church production world.

Mike Sessler.  He is the Technical Arts Director at Coast Hills Community Church in Aliso Viejo, CA. You probably know him as Mike from Church Tech Arts.  He’s been working with sound, lighting and video for twenty years.  He also works as a system designer, engineer and creative content producer.  He’s also focused on the “other side of tech work” which comes in mentoring others.

Mike spoke the message that God put on his heart.  (I’m hoping he’ll post it up on his blog.)  He brought a unique perspective to our work.  From Exodus 31:1-5 “Then the Lord said to Moses, ‘See, I have chosen Bezalel son of Uri, the son of Hur, of the tribe of Judah, and I have filled him with the Spirit of God, with skill, ability and knowledge in all kinds of crafts — to make artistic designs for work in gold, silver and bronze, to cut and set stones, to work in wood, and to engage in all kinds of craftsmanship.”  Mike spun this into his own phrasing for the tech world so that you and I see how God calls us and uses us for his purpose.

My take-away; Not only am I presenting my skills and talents to Him but he is also using those to accomplish His goal.

Matt Reagan.  He is the High School Teaching Pastor and the Leader of Next-Gen Ministries at Southeast Christian Church where Gurus was held. “Matt is madly in love with his beautiful wife, Sarah, his three rugged boys, Noah, Samuel, and Levi, and his precious baby girl, Ava.”  Honestly, what could I add to that!?!

Matt spoke on discipleship and he walked us through the last years of Christ and His repeated words of “follow me.”  Matt explained how you and I are to be “fishers of men.” While that all sounds well and good, if you are anything like me they you have the mindset of “God has gifted me in the audio ministry and that’s how I’m serving him.”

My take-away; I am to be a fisher of men.  My “God-given talents” in audio are a way in which I can worship Him and serve Him but they are not a replacement for speaking the truth to non-believers.

Have you ever wanted to meet the person behind the twitter avatar?  Gurus is the place to do it.  After a long time of online communications, I finally met Duke, Mike, Derek, and Dave.  I met people from Church Tech Leaders.  I was even lucky to have Jeff F. come up to me and say “I read all your stuff on your web site.”

Not only was Gurus a great place to met these people but then we’d go out for lunch or simply hang out during breaks and tell stories. 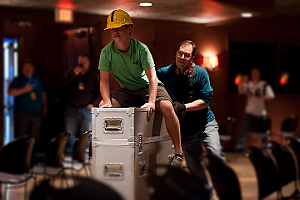 And you want to talk about contests?  Gurus had the best contests.  They were fun, funny, and everyone was a winner!  The games included;

Small groups were a big winner in my book.  Everyone was placed in a small group with no more than 10 people.  Over the course of three days, we met three or four times.  The discussions focused on general “getting to know you” to the final session of “how can I pray for you and support you.”

I was thrilled the people in my group were open about who they are and the support they needed.  Even though the conference ended, I’ll still be praying for them and communicating with them.  Thanks to John, Jarod, Ed, Jeremy, Olyvia, and Michael.  Praying for all of you.

Pure energy is what I felt the whole time.  Even though I was fighting my seasonal allergies, I felt energized.  Being in a community of believers who all work in AVL production, I felt supported, nurtured, filled, and energized.

It’s hard to say anything even remotely negative about the conference.  However, I do think there is one area for improvement; taking questions in the breakout sessions.

It might have been Pat Brown who once said “I start every reply to audio questions with ‘it depends.’”  Nonetheless, when you get this many people coming from a wide background with different gear set-ups and of course mixing in different rooms, there will be a lot of people with questions that have an “it depends” response.  Those questions take a lot of time to answer.

I’ve done teaching sessions before and it’s real easy to tangent off and focus on answering questions and then running out of time.  I’d like to encourage future breakout leaders to consider this and perhaps plan for a Q&A period of time after their lesson for the longer “it depends discussions.”

Most presenters did a good job of moving along the questions and the lessons but it’s just something they need to plan on.  That reminds me, I have a question…

Can You Help the Gurus Conference Grow? 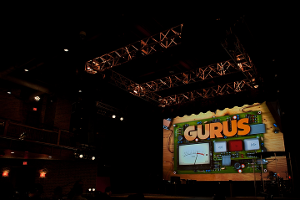 I talked with Ben Mankin, of Mankin Media, who supported/sponsored this conference.  Specifically, we talked about ways of promoting the Gurus conference so more people would attend.  This isn’t about money…because the conference is free.  We’d love to see as many people as possible attend Gurus so they can be fed, supported, encouraged, and even learn some cool stuff along the way.

Ben’s got an idea and I think I can help him out.  I’ll let you know when something solidifies.  I’ve got an idea of what he wants and we’ll likely need your help to succeed.

For now, if you attended Gurus, tell your fellow tech’s about your experience and tell them how you benefited.  Post something on Google Plus, twitter, and/or facebook.

I have tried to make this post as helpful and informative as possible…and keep my rambling to a minimum.  Gurus was a wonderful time for me and I encourage you to attend the next one that comes around.

A special thanks to Mike for his company on the drive to-and-from and all the great discussions the whole time through.