How We Screw Up Our Ears – Healthy Ears 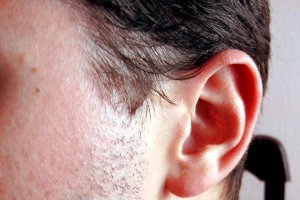 “Can you hear out of this ear?” the nurse asked me.  “Yes,” I replied.  She proceeded to pull out the nastiest wax I’d ever seen.  “I THOUGHT I could hear,” came my next words.

Ear health isn’t a topic that will trend on Twitter any time soon but it’s important for sound engineers and musicians.

Usually, we are only told to avoid prolonged exposure to high sound pressure levels.  There’s much more we should be doing and it starts with knowing how our ears clean themselves. 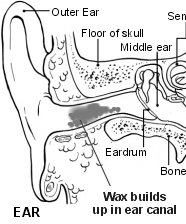 Cerumen, commonly called earwax, serves as a self-cleaning agent with protective, lubricating, and antibacterial properties.  Created by glands and released in the outer one-third of the ear canal, it traps small particles and prevents them from potentially damaging or infecting the eardrum. Some people have wetter wax while others have more of a dry wax.  Gross, right?

Our body creates earwax to protect the eardrum.  The amount of wax created and the type created varies from person to person.  Earwax is slowly transported from the ear canal to the ear opening by jaw motion (talking and chewing). Gum chewers must move wax at an amazing rate!  Once at the ear opening, it usually dries, flakes off, and falls out. Easy breezy, lemon squeezy.

All three scenarios lead to wax impactions.  And here’s where the real problems start. Earwax impaction can lead to:

Any time we stuff something in our ear, it will push wax back into the ear canal.  The use of in-ear headphones and earplugs push that wax back into our ear.  For some people, this isn’t a problem because their ears produce little wax or do a great job of shedding it.  For some of us, it means unless we clean our ears when needed – likely at a frequent rate, we will end up visiting a doctor.

When to clean vs. see a doctor

An ear with a slight full feeling is a sign it’s time to clean out your ears.  Notice I said “slight.”  You know your body and when something doesn’t feel right.  If you have any of the below symptoms it’s likely an earwax impaction so skip the cleaning and go straight to the doctor. When in doubt, go to the doctor.

How to SAFELY Clean Your Ears

Before going straight to the cleaning, be advised you should avoid it if you have diabetes, a perforated eardrum, a tube in the eardrum, or a weakened immune system.  In any of those cases, consult a doctor.

For general cleaning, wash the external ear with a cloth but do NOT insert anything into the ear canal.  NO Q-Tips! 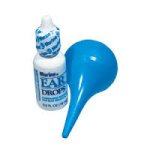 For earwax removal (blockages), place a few drops of mineral oil, baby oil, glycerin, or commercial drops in the ear.  Wait 15 to 30 minutes , or as directed by the commercial drops, and irrigate with warm water.  Using an ear syringe filled with warm water, place it outside of the ear canal and irrigate the ear.  DO NOT BLOCK THE EAR CANAL WITH THE SYRINGE!  THE WATER HAS TO HAVE ROOM TO EXIT!  Yes, all caps and exclamation points.

Commercial drops include those by Debrox and Murine, though many generic brands are also available.

Depending on the amount of wax, this process might need to be repeated twice a day for a few days.  If it’s that bad, consult a doctor and follow their instructions.

Curettes and other tools

There are other ear-cleaning tools available but I don’t recommend using them.  Tools, like curettes, in the hands of medical professionals are good.  But just because you can buy them in the store or online doesn’t mean you should.  Leave it to your doctor, nurse, or otolaryngologist (yeah, I had to use that word sooner or later).

What about ear candling? 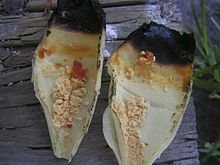 Comparison between burned alone and burned in an ear. Photo by Surfo

Ear candling is a procedure using a hollow cone made of paraffin and beeswax.  The tapered end is placed in the ear and the other end is lit on fire.  The theory, as people are lead to believe, is the flame creates a vacuum that draws the wax out of the ear.

Ear candling does not work.  It has been debunked in clinical tests.  People who perform candling show it works by blowing out the fire, cutting open the cone and revealing the “vacuumed” wax.  By burning the cone by itself, the same results can be shown.  The risk of damage to the ear is very high via hot wax dripping into the ear canal.  For further information, look here.

Earwax is a normal product of the human body, used for protecting the eardrums, and is normally discharged from the ear.  The use of in-ear headphones can contribute to pushing wax back into the ear canal.  The best thing you can do to promote healthy ears is to give them a good and safe cleaning when they need it.  Oh, and don’t listen to loud music all day long.