How to Deal with Criticism 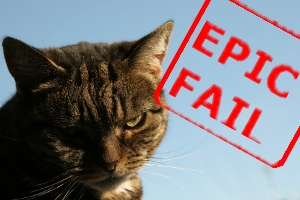 Criticism for Something Someone Thinks We Did Wrong

Let's start with the latter.  My favorite story comes from a guy running sound at a live venue.  Two people came up to him at the same time; one said it was too loud and the other said it was too soft.  If these people were sitting in the same area, even next to each other, the question to ask is "who is right?"

There are some areas of our work where there is no right answer or at least no answer that is right for everyone.  These can include the overall volume level, the way we EQ an instrument, the way we set up a stage (some people might think it looks messy), and even the volume level of particular musicians and singers.

The best way to deal with such criticism is to listen and take note of their complaint.  For example, if one person says they couldn't hear the acoustic guitar, apologize.  Then ask fellow sound techs and friends to find out if they noticed the same problem.  If not, don't worry about it.  We all have ears but they don't all work the same.

Regarding sound levels, we use a sound meter.  By recording the volume levels each week for specific parts of the service (pastor talking, soft song, upbeat song) then when we have a criticism regarding the sound level, we can compare the volume for that service to previous services.

One final note on this type of criticism, if a person brings up the volume level issue, ask where they sat.  Location can make a difference.  There is only a 5 dB variance in our sanctuary from the loudest spot to the quietest.  However, those 5 dB can make a difference and if you get repeat complaints from people sitting in "the bad seats" then you might consider boosting your overall volume or investigate into secondary speakers.

Criticism When We Deserve It

I've found people more likely to dish out this type of criticism.  They might not say it directly like "you should have been prepared for that sudden mic change."  They are more likely to say "that must have been a rough service for you."  I find the best way to acknowledge any type of criticism in which it might be warranted is to smile, accept it, and apologize.  Depending on the person and the issue, I might talk about what happened or why it happened or I'll just let it go.

Finally, here are a few general rules of thumb about dealing with criticism;
1. The more people criticize you on the same issue, the more likely they have a valid concern.
2. You can't please everyone all the time.  If you thought it sounded good and so did your friends, the one person who thought it was bad, well, that's just their opinion.
3. People might make constructive criticism.  "Have you considered____?"  Listen to these people.  Maybe they have a good idea.  Maybe they just need to be heard.
4. Don't take it personal.  Audio production is a difficult job and we do the best we can.  See #2 above. :)
5. If someone criticizes you and you're really not sure how to take it, ask your tech director about it.  They've probably heard their share of complaints and can help you out.
6. We don't offer feedback surveys so criticism is often the only way we can get negative feedback.  It's just the nature of the job.