How To Lead Your Team With The Truth

For the first time since high school, I ripped a picture of a person out of a magazine.  This time, it wasn't going inside my locker door or on my bedroom wall.  This picture is going on my desk at work. 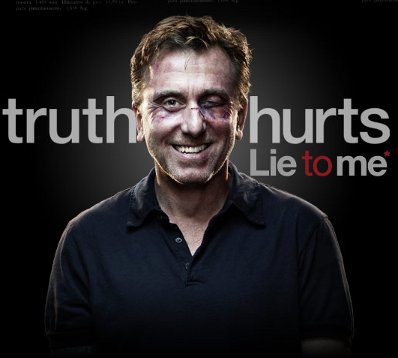 Tom Roth stars in the television show "Lie to Me" about a man, Cal Lightman, whose business is identifying liars and extracting the truth – which is not an easy job as the photo indicates.  The advertisement shown above, with the picture of Cal with a black eye, cuts, and bruises, shows something out of the ordinary – he is smiling.

I ripped out this picture because it represents leadership.  Part of leadership is how we handle the truth.

In the show, the pursuit of truth follows these steps;
1. Asks "what is the truth in this scenario?"
2. Asks "Why was the truth hidden (Why did they lie?)"
3. Asks "What do we do with the truth once it's revealed?"

Easy:
A volunteer consistently shows up late, knowing their responsibility to be punctual.  The truth is they are disobeying the rules.
I make a poor decision mid-service which results in the loss of several minutes of recorded sermon audio.  The truth is I messed up,

Not-So-Easy:
The same person repeatedly complains about the audio whenever a certain volunteer is behind the mixer, even though you think their work is good.
One of your leadership methods is called into question.

In those last two, it's not easy to quickly establish the truth.  Therefore, we must spend the time investigating the statements in hopes of finding the truth.

Let's take the first scenario; complaints against a specific volunteer.  After validating their performance against what you have heard as well as through a few other sound tech's and perhaps a few friends in the congregation, you determine the truth is there is nothing wrong with what they are doing.  That leads us to the second point…

Why did that person lie to you about your team member's capability?  "Why was the truth hidden?"  Following this example, let's say you find out the volunteer and that person have been having problems at work because your volunteer got a job promotion over the other person.  You've determined they are trying to slander your volunteer.  This leads us to the third point…

What do we do with the truth once it's revealed?

In the example we've been using, you might opt to ignore that person's complaints, confront them, or call in pastorial staff to deal with the problem.

In the case of the consistently tardy volunteer, you might investigate why they are late (family problems or just lazy) and then take proper steps to put them on notice, remove them from your team, or see if you can provide assistance in the case of family/home problems.

In the case of your methods being challenged, you must determine the validity by evaluating your motives and talking with others for their perception on your methodology.

There is an apparent paradox in the "Lie To Me" photo, at first glance, in that Cal Lightman is smiling despite his battered face.

The wonderful part of being a leader is that we can teach, lead, and shepherd our team with the knowledge that if we do the hard work of investigating, discovering, and taking appropriate actions based on the revealed truth, we will become a better leader with a better team, day after day after day.