How Low Can You Go? (When Volume Reduction is Required) 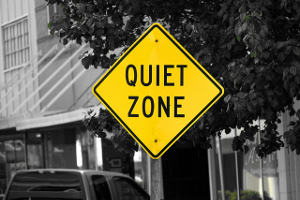 This weekend, we did communion a different way. Instead of passing the plates, we had communion stations around the room so people could group up after getting the elements and then taking communion together. (Isn’t this supposed to be about volume? – Yes, stick with me.)

The problem was the congregation would be doing this WHILE the worship band was playing AND the volume needed to be low enough that people circled up could clearly hear each other.

The Problem with Volume Reduction

Take a red balloon and fill it with air. Unless your lungs can’t handle it, you’ll end up with a nice large pretty balloon. (If you picture me holding a red balloon, this analogy is slightly more interesting). Anyway, what happens when you remove a lot of that air – without letting it go completely flat?

Exactly! You get a dead-looking balloon that’s about as fun to play with as a dead cockroach. Maybe that’s a bit of a stretch, but you get the idea.

Take a 1,600-person room and fill it will the right amount of volume to get the place rocking and all is well. Now, take away a lot of that volume and what do you get?

Exactly! I’m not saying it’s a dead cockroach but you hear the drums from the stage, the singers from the speakers, and the whole thing lacks energy – JUST BECAUSE YOU DON’T HAVE THE RIGHT VOLUME TO FILL THE SPACE!

Time to Fake Some Air

How do you reduce the volume but still get the energy? You cheat.

Placed right in front of our front-fill speakers were communion tables. Not a glamorous photo, but here is one of them: 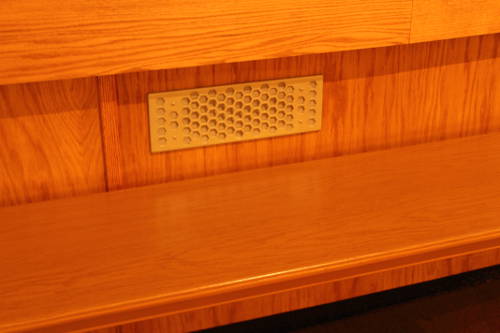 Even at a reduced house volume, this would be a problem. Therefore, we opted to run those with a 20dB pad. We tested this Wednesday night and were pleased with the results. With a 10dB reduction in house volume, the reduced volume from the loud speakers were enough to create the intimacy while allowing people in the front the freedom to talk.

The other important piece is the mixing. Take a normal mix and cut it by 10dB. What happens? Some channels might disappear. Most likely, the low end stuff will still be present. It doesn’t sound the same.

The quieter mix required I bring down the lows even more and boost some of the upper mids, in the 2kHz to 6kHz range. With these changes in place, there was one last thing to really make it work.

Through the four-song set, I rode my vocal faders. With two singers alternating the lead parts and singing harmony the other times, riding the faders was the easiest way to keep the volume where needed while still presenting the energy of the mix.

The volume didn’t need to stay low for the whole four-song set, only for as long as the people were taking communion. As a result, I was able to slowly raise the volume on the third song and everyone was singing out. Then, as if riding a wave, I pulled the volume back down for the last song, and the congregation sang out even louder.

It’s easy to dial in a mix at the normal volume. But, toss in a volume reduction requirement and you’re going to do a little extra work.

Check out these articles for a larger view of volume level considerations and how to add energy to a mix: