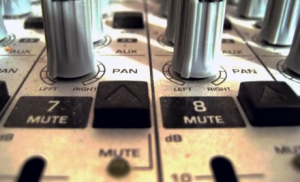 How many mute mistakes have you made?  You wouldn’t think one little button with one simple function would cause many problems but it does!  Time after time, people fall victim to its simplicity.  Now you can find out how to minimize your mute mishaps.

The first mute mistake I ever made was when I was working at radio station 89.5 WFCI – Indy’s New Rock Alternative.  95% of the music was on CD with 5% being on vinyl.  The CD players were set to stop after a track was played.  As a DJ, that was great because I never had to bother with fading or muting a CD channel on the mixing board.

But then came the Eurythmics.

Their album was on vinyl and it was the first cut on the A-side.

The song lyrics ended and the last 20 seconds were instrumental.  I announced the standard segue with the radio station call letters, the name of the song I’d just played and then did the pre-sell for the next three-song set.  Somewhere along the way, I also started the next song.

I turned off my microphone and then something caught my attention.  The song on the air didn’t sound right.  It was a new song, the format was alternative rock (when it was up and coming in the mid 90’s), and I’d never heard it before.  Even with all that being said, I knew something was wrong.  Out of the corner of my eye, I saw the record player still spinning.

The second track on the vinyl album was playing at the same time as the one in the CD player.  I’d been so used to the auto-stop of the CD player that I’d forgotten to mute the record player!

The idea of muting is simple.  Looking at each channel, your mixer will either have a mute or an on/off button.  For simplicity, I’ll reference this as the mute button.  Using the mute button, you silence that channel completely.  This includes anything going to the monitors.

There are also assignable group/VCA mutes.  In this case, you can route multiple channels to one control for volume and mute-ability.

The more components a signal has to traverse, the more noise that can be introduced into the signal.  Therefore, the VCA-enabled mixer doesn’t require the signal to go through the additional fader component of the channel.

There are seven common mute mistakes;

1. Not muting unused open microphones.  An open microphone that’s not being used can introduce noise and unwanted stage sounds into your mix.  Also, in the right scenario, they can become the cause for feedback.  Mute every unused open channel.

2. Muting instead of fading.  Picture this, a soloist is singing to a recorded track.  She stops singing and the CD track begins fading out.  Suddenly, the music stops.  “NEXT!”  That’s about how it comes across; “your done, I stopped the music, please exit the stage.”  You are producing the whole service, so everything should flow together.  Therefore, fade music all the way before you mute the channel.

3. Muting without fading.  The best example of this is that you are playing the recorded track from #2 and you let the CD music fade naturally as per the recording.  Then you mute the channel once the song is over.  Fifteen seconds later, you hear something coming from the stage.  You have muted the channel but the monitor is still active and the CD is now playing the next track.  Therefore, when playing media, remember it’s best to use both the mute and the fade in case you forget to hit the STOP button.

4. Un-muting with the volume up.  The pastor starts talking and you’ve forgotten to un-mute his channel.  Therefore, you un-mute it with the fader already at the nominal level.  POW!  His voice bursts through the air in a rather unpleasant fashion.  [Unpleasant fashion?  Where did I pull that phrase from?]  Instead, move the fader down, un-mute the channel, and raise the fader up to the proper location.  This one isn’t so much about not making a mute mistake but how to best recover from it.

5. Incorrect muting with mute groups.  Going back to the mute group / VCA comments I made earlier in the article, depending on your setup, you may or may not be muting the monitor sends as well.  Make sure you have your pre/post fader channel options selected correctly and test them by muting the group during rehearsal.

7. Missing a cue.  You didn’t un-mute a channel in time.  I almost didn’t list this one as it seems more about paying attention and less about the mute button…but when it comes to that lil’ ol’ mute button, it’s front and center.  You need to bring your A-game each time you are behind the mixer.  Do that and missing a cue won’t be a problem.

Mute mistakes are the biggest mixing issues the congregation notices during a service.  One or two people might notice a mistake in the drum mix but when you miss a cue or jar them by suddenly muting an active channel, everyone will notice.

Send this to your sound tech friends and save them from making a mute mistake at the next church service.