How to Resolve a Simple Line Check Problem 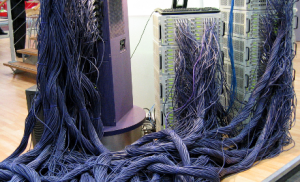 Resolving line check problems can be quick and easy when you use this three-step approach. It’s simple, it follows a logical flow, and it can be done in a very short period of time.

A line check is the process of checking that all instruments and microphones on the stage are sending signals to the sound board. This process happens before a sound check or might be considered part of the sound check. During a line check, you are apt to discover problems like bad cables, bad connections, dead batteries, and (gasp!) dead mixer channels.

I think of a line check as more than just getting the signal but also getting a clear signal as well. In some cases of line check problems, you will neither get volume nor a signal light on the channel. While the lack of the signal light can determine what you check, using the below process list, you’ll find out everything that should be checked when either case arises.

Resolving a simple issue with a vocal microphone

Let’s say the singer is singing into the microphone and you don’t hear anything coming through the main speakers.

Step One: Check for the obvious

These are all things you can do from the sound booth and/or have the person on stage easily check for you.

Follow this three-step approach to resolving line check problems with vocal microphones and you’ll be moving onto your sound check faster than a vocalist can say “testing 1, 2, 3.“