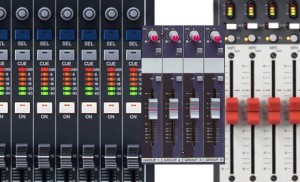 A subgroup, by any other name….works differently.

Analog and digital mixers allow for controlling multiple channels as if they were one.  These controls are commonly known as subgroups…but not really…maybe in the generic sense…but then you might say VCA’s if that’s what your board uses…because subgroups are different. [Sigh]

There are several methods for grouping channels together.  Each works differently, of course, because some days things have to be complicated.

There are three main groupings used in mixing:

There are three types of groupings; subgroups, VCAs, and DCAs.

The “normal” subgroup control works the simplest way by acting only at the grouped level.  Take four channels and send their signals to a mix bus that sums the signals.  Moving the fader up or down is increasing or decreasing the volume of that summed sound.

The VCA (voltage-controlled amplifier) works by referencing the source channels.  Take four channels and send their signal to one fader.  Every time you increase that group fader volume, the group control sends a message back to those channels so each channel increases the volume coming out of it.  A VCA is more like a remote control.

The DCA (digital-controlled amplifier) works much like it sounds; instead of altering the actual signals from the channels, the signals are processed in the same way, which then leads to increased or decreased volume.

Is there an advantage between group types?

The “normal” subgroup is good for adjusting the volume of the grouped channels and sending that level out to the main mixer faders.  That being noted, the volume levels of those individual channels stay the same as far as their signal being sent to other locations such as a post-fader mix like a reverb unit.  Lowering the normal subgroup fader, you could still hear those channels going through your reverb unit.  In which case, you’re back to using more than one control for working with a group of channels.

The benefit of the VCA/DCA group is that when you lower the volume on the VCA channel, it’s lowering the output of each channel.  Therefore, any post-fader mixes, like the reverb units mentioned, are equally affected.  You are preserving the dry/wet balance of the reverb effect.

The first time I started throwing around the word “subgroup,” a fellow tech said to me, “but VCA’s work differently.”  It was like they opened up a whole new side of the technical realm – just because it looks the same doesn’t mean it works the same.

Standing in front of your mixer, you’re in control of a gigantic musical instrument.  Like any great musician, you must know how each part of your instrument (mixer) works.  Subgroups, VCA’s, and DCA’s control the volume of your channels at different points.  Knowing how your mixer works with grouped channels, you know what other work you may or may not have to do for controlling your sound.