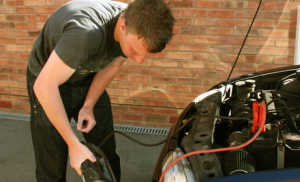 Your worship leader has been knocked to the floor as his floor wedge suddenly explodes with a huge volume increase.  The church service ends and you’ve got thirty minutes until the next service to find the problem and fix it.  Where do you start?

A very similar scenario happened to a friend of mine working in the pro audio field.  Only it happened for four nights in a row until the problem was solved.  And the primary reason it took so long to fix was that someone above him didn’t recognize the ways equipment can fail and thus denied my friend’s request for a swap of a particular piece of gear.

Equipment usually fails in a couple of ways;

These failures are usually simple things like a short in a cable, a bad cable, or a blown piece of equipment like a power supply or internal electronics.  There are also problems like a blown speaker.

What about the boost in the monitor volume?

No, my friend didn’t crank the gain or any such thing.

Let’s look at the signal path;

Using this path, let’s look at the possible sources of a problem;

Right off the bat, we can drop cables from out list of potential problem sources.  Also, as all the input sources are boosted in the monitors, we can drop those off the list.  It’s something after the signal gets to the mixer.

Now we are down to;

Where would you put your money between the amp and the mixer?

Truth be told, the amp is going to fail down as well.

Hate to break it to you…your mixer is busted.

My friend knew this and wanted to swap mixers but the “higher up” continually denied that possibility and so forced him to try everything from cable replacement to monitor replacement until finally recognizing it was the mixer.

Stuff fails.  You are alerted to this failure by what you hear (or what you don’t hear).  Knowing how equipment fails will help you diagnose the problem correctly and get the system back up and running as soon as possible.

Question: What failures have you encountered?