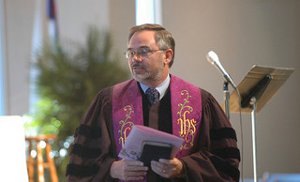 Making sure the message is heard.
Photo provided by schram

[Guest Post by Jeremy Epstein] [Note: Mic’ing pastors was a subject in the last newsletter and it spawned several responses. Jeremy responded with a lot of great information on what he’s experienced so I asked him to write it up as an article.]

I’ve learned a lot about mic’ing people, working as sound tech at First Presbyterian Church of Brooklyn, NY. Over the years, I’ve worked with several different pastors and many guest speakers.

In our church we have these three ways the pastor is mic’ed when presenting to the congregation:

Here is how we have addressed each position:

The only real issue is we get a fair amount of the room’s sound back into that mic, because of the acoustics of the pulpit area. Our sanctuary sounds very good and the room sound does not interfere with intelligibility very much (the delay is long enough.) So, as long as I ensure that the mic isn’t pointed in the wrong direction, that works fine. I gate and compress this mic a bit for our webcast and recording feed – a little goes a long way so I am careful not to overdo it. Ambient mics are NOT gated, and this helps the mixed result sound more natural. When the service only contains speech I dial back the ambient mics and just use enough to fill in any gaps left by the gating so it isn’t so obvious. The gate is set with a fairly long release for the same reason.

The lectern gets used by other speakers besides the pastor. Varying heights and varying speaking styles mean that it is more challenging to keep the level of this mic consistent. But that’s what the channel fader is for! This mic (as well as the lavalier) actually is submixed into the same DAW channel that the pulpit mic goes through for our webcast and recording, and so the same gate and compression settings are applied to all three of these sources.

For the above positions, adjusting the physical starting position of the mic is part of my pre-flight check and this is very important. If my mics are pointing at the ceiling or sideways, I can’t always rely on the users to adjust them correctly, and the sound is terrible. If I am expecting an especially short or tall person to use either mic I’ll try and pre-set them accordingly, but you get what you get.

This has delivered inconsistent sound for us because of different issues, such as the mic rubbing against clothing as described in the newsletter. Last week, I was able to try a different, far better, lavalier capsule. I was able to borrow a Countryman B3 lavalier mic and it performed much, much better than the stock Shure lavalier capsule. I did not need much EQ on the lavalier and it matched up very well with the sound of the other mics. So I can certainly hold out some hope there!

I was able to ask a two-man engineering partnership, who use lavaliers often for motion picture/video production sound, how they place them. Their recommendation is the same as on this site: over the sternum depression in the upper center of the chest. And they both also gave the advice to use a good mic capsule.

Some noise-making things to watch out for when using a lavalier on a pastor: crosses, stoles and other items hanging from around their neck. I have worked with many female pastors and so I am always particularly aware that I must be businesslike and careful when clipping the lavalier on their clothing. Ask first. Finally, sometimes attaching the body pack can be a challenge, too, especially on a female pastor depending on the style of clothing they are wearing, the presence/absence of pockets and belts, etc. Have a clean, strong bulldog clip or two available in case you need to attach the body pack at the back of a dress or pocket-less jacket. They come in other colors but I seem to get away with black ones every time. Don’t assume the pastor’s robe has a pocket!

My job is making everyone sound as good as I can. At one time, we frequently had a problem with a particular speaker whose voice, when they got rolling, became loud, screechy and pretty unpleasant…like, comments-from-the-congregation unpleasant. I kept trying and ultimately, even with using a compressor, a sidechain focused on the “screech” frequencies, and carefully setting the EQ on the board, I still couldn’t make any noticeable improvement whatsoever. Sometimes, it’s just all about the source, I’m afraid.