Mastering Signal Flow – Here it Comes and There it Goes 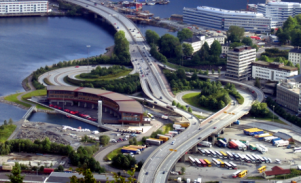 Learn the flow of audio signals so images,
like this, are funny instead of frightening.
Photo provided by Ayla87

Growing up in a one hundred year-old home, I learned how to fix plumbing problems.  One lesson was tracing all the pipes in the basement so I could tell which pipes had fresh water and which ones carried sewage.  You might say it was my first exposure to signal flow.

Signal flow is the flow of the audio signal from the sources of input to the places of output, from sound-to-speaker, if you will.  Learning how to set up the stage, you saw how the signal flows from an electric guitar to a pedal board to a DI box and then into a stage jack.  Now you will see what happens to that signal once it gets to the sound booth.

An audio signal travels from the source towards some sort of output.  For example, a singer’s voice is picked up by the microphone which, through a series of components, makes its way out to the house speakers.  Consider this as the general directionality of the audio signal – from a source to a destination.

The sound booth is like a giant airport where signals are coming in and going out, from multiple sources to multiple destinations.  Destinations can be house speakers, floor monitors, recording software, and even church nursery speakers.  The primary component that takes care of all these transfers is the mixer.

Coming into the mixer, are a variety of sound sources which will all be assigned to the channels on the mixer.  Naturally, you have your sources from the stage but you also have sources such as a computer, tape deck, CD player, and even audio feeds from video devices.

Once the signal is going to a channel, it tends to follow a general path that can vary slightly from one mixer to the next.  From the signal input, it usually follows as such;

Looking at the signal flow on the mixer channel, most extra on-board controls like compression and padding occur before the signal goes to the equalizer.  Also, signal to the auxiliary controls for the channel’s audio sends, such as for monitors, will be either before or after the fader depending on it the auxiliary control is set to send as pre-fade or post-fade.

Out of the Mixer

The signal can travel out of the mixer in a variety of ways;

The output signal can go directly to another processing device, like a reverb or compressor as I mentioned above.  Or, it could be routed for your house speakers.  It’s here where you need to dive behind your components and start following some cables.

Audio signals can be routed a variety of ways.  I’ve seen systems where the main out was first routed through a tape deck before going to the amplifier.  Such routing is understandable considering the fact that you commonly want to record a service.  However, for more finite control, they could have routed the recording device to an auxiliary channel where the mix for the recorded media could have been different.

Note that the signal strength between components is considered to be at line level.

You should expect the mixer’s main output to go out to the house EQ, through any house compressor or limiter, and then to the amplifier and speakers.

What to do when the volume stops

Knowing how sound travels through the audio system, you can quickly find the source of audio problems.  Take for instance an electric guitarist who has started playing during the sound check but you don’t hear them in the house mix.  By tracking the audio signal from its source, you can investigate where the problem might be located.  For example, if you are getting a green light on the channel, you know you are getting a signal from them.  Perhaps the gain is too low.  Maybe you aren’t getting any signal light.  Start at their guitar and make sure the signal is taking the right path to the sound booth.  It could be a mistake as simple as improper cabling into a direct input box.

When the sound is bad

Every time an audio signal goes from one component to another, you can pick up unwanted noise.  This is called line noise.  Regarding the signal flow coming from the stage, we need to look at something called the signal-to-noise ratio.  In short, this ratio explains the quality of your sound.  For example, let’s say you have an acoustic guitar with an on-board amplifier.  This gives the musician the ability to control the level of the signal from their guitar.  If they don’t raise the on-board amp’s volume high enough, you could hear a large amount of noise in their signal.  By increasing the volume on their guitar amp, they are improving / increasing the signal-to-noise ratio.  This means when the signal is amplified, there is very little noise heard because the strongest signal is coming from the guitar.

The flow of the audio signals through your system can take different paths.  There is an order to the mass of cables running to and fro.  You can have a great grasp of how your system works, when you know how your audio signals are routed.