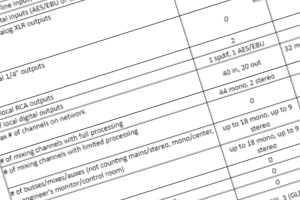 In the process of selecting a new mixer for my church, I wanted to research every option available. In the process, I created a spreadsheet comparing the features and specs of digital mixers, available at the time, that were within our price range. You’ll find a link to it at the end so maybe it can help you as well.

It was important it be thorough enough that I could look in one place to find what would and wouldn’t work for us. I included basic specs such as number of channels and inputs/outputs, as well as needs that were specific to my church, like whether a direct output could be set to tap off before the compressor.

You can find the spreadsheet here.

During this time, my church had a Roland M-400 mixer, sold to us by a local integrator when our Mackie TT24 gave out. The mixer proved to be very reliable and had more than enough available channels and inputs. However, it provided no method of allowing the musicians on stage to mix their own monitors, unless we spent thousands of dollars on their personal mixing system.

Also, the Roland had no method of remote control aside from a PC editor. The lack of scribble strips made re-arranging channels a tedious chore. It did provide a custom user-layer, but without LED scribble strips that changed with the layer assignments, the user-layer was essentially useless.

The church had serious issues with stage volume. Guitar and bass amps on stage made mixing at a reasonable volume level nearly impossible. Mixing monitors from the FOH position was not working out for the team. We needed an in-ear system.  We needed a change.

I created a spreadsheet with all of the mixers that fell within our price-range and started my evaluation.

I reviewed my options:

At this point we only had two options, the StudioLive or the Behringer X32.

The X32 was still very new and a hot topic within the audio community. I was skeptical of it at first considering the company’s history, but our local pro audio shop offered to let us demo it. After testing it, I wasn’t 100% sold because I ran into a number of minor issues including an occasional pop in the system; however, at the price point of the mixer and even more-so the price point of the P16 personal mixing system, it was too good of a deal to pass up.

We sold our Roland mixer and used the funds to purchase an X32 and P16 system. After the first Sunday with it I knew we had made the right choice. Not only did the mixer check nearly every box I had, it even sounded better!

Afterward, I continued to maintain the spreadsheet I’d made of the various available mixers, knowing we would likely need to upgrade to a higher capacity mixer in the future, and knowing other churches may be in the same situation. My goal was and is to have one place people can go to see the differences, and determine which specs they can and cannot live without.

The spreadsheet lists the specs and features I found to be most important and lists them on the leftmost column. Across the top row are the model names of each mixer; it includes every digital mixer that I know of that has at least 32 channels and costs less than $10,000.

At this time, the spreadsheet compares of the following mixers:

You can find the spreadsheet here.

[Note from Chris: a big THANK YOU to Brian Henson for this article, his willingness to help the community with the spreadsheet, and all his help in our Facebook Group.]

Brian Henson is a musician and sound guy who can be found during the week doing tech support for Intel.