Mixing Drums: From Stage to Console

Let’s deal with this upfront, drummers play a role in creating the right sound for the room and the music.  We’ve all probably seen the youtube video of the drummer who doesn’t fit the gig. That’s wrong on many levels but let’s look at what they should do.

To check out the podcast versions of this (where we take a longer period of time to say the same things), scroll to the end of the article.

They should play at the proper level for the room.  They need to use equipment that works for the room as well as play at sound levels right for the room.  In some cases, such as with cages, this isn’t so much of a concern.  Even a large enough room can be forgiving.  However, for most sanctuaries that hold less than 600 people, they have to control themselves.

Did you know the end of a drum stick can determine how the drums sound when hit?  Consider these five shapes of drumstick tips and their affect on the sound.

They also need to care for the drum kit as if it’s their own.  In some churches, the kit does belong to the drummer.  They need to keep it in tune and tune it for the room – more on that soon.

They also need to watch for wear and tear on the drum heads.  Do they need to be replaced every six months?  Most likely, but it depends on drum usage.

I was listening to an interview with a guitar tech who'd worked with many touring A-level artists and when asked, how often do you replace guitar strings, his response was it could be daily or weekly depending on the musician's tone preference.  That's WEEKLY string changes at most!

Shields and cages, the battle rages

Brian and I talk about this at length in episode 24 of the podcast.  Here’s the short version…we hate using cages.

A cage is expensive, removes the musician from the rest of the band and thus reduces the connected-ness with everyone in the room, they aren’t cheap, and you have to account for venting and airflow.  And did we mentioned dealing with the sound bouncing around inside the cage?

However, we understand why churches opt for drum cages.  In the end, it’s an easy way to get rid of a cage is find a drummer that can play for the room and respect their place as a musician.

As for shields, we understand that even in a small space and with a decent drummer, using a shield can help control the drum volume so it can be properly mixed with the rest of the music instead of blasting out the first couple of rows of people.

If a shield is used, make sure the space behind the drummer is acoustically treated so the sound isn’t simply reflected back into a hard-surface wall and then bounce back and forth and back and forth and….you get idea.

Know what type of drum heads (skins) to get.  These affect the tone and volume of the drums.  For further information on drum skin selection and tuning, check out these articles:

Above, I mentioned how the tip of a drum stick impacts the sound.  Also, the type of stick makes a difference as well.  The standard different types are sticks, rods, and mallets.  Mallets have a large soft head on the end, usually reserved for arrangement-specific usage.  Rods are a bundled group of thin “rods” that when played will absorb a little of the impact.  And sticks are what we think of when we think of drum sticks and why am I suddenly hungry for chicken?

Sticks can be of different lengths and be made of different types of wood and thus have different weights and the type of wood also affects how long the sticks will last.  The woods can be hickory, maple, oak, or even plastic (that’s not a wood!)

The three main stick weight categories are 2, 5 and 7, though the scale runs from 1 up to 9.

You might see a drum stick labeled “7A.”  And this is where labeling gets wonky.  Long ago, companies used the letter for the genre.  A: orchestra, B: marching band, S: street band, and D: dance band.  Today, the companies label them however they want.

Time to get into more of what we can control.  When it comes to picking a method for miking drums, you’ve got several options but let’s simplify them down to two:

Using this method, a dynamic microphone is used for the kick drum, a condenser is used across the toms pointing at the snare, and one or two condensers are used as overhead mics, equally spaced so as to avoid phase problems. 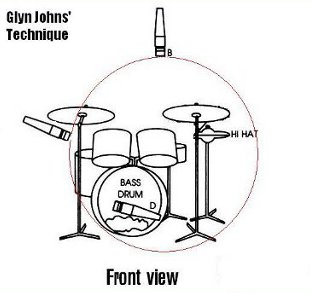 This method gets you everything you need.  When I use this method, I make sure the overheads capture the full drum kit sound and I start that as the loudest channel of the drum mics.  From there, I bring in the kick drum and then the toms/snare drum as needed.

I use this now because it works for my situation and I like it.  In this case, every part of the kit is closely miked except for the overheads. 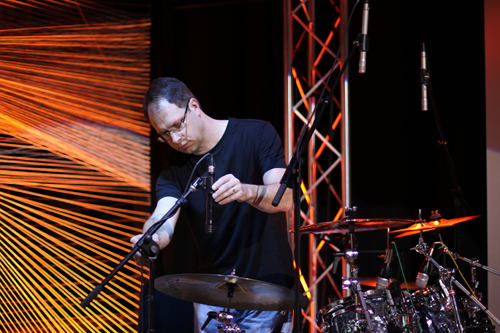 Overheads are NOT only for the cymbals.  That’s a common misunderstanding.  They are for capturing the whole kit.  My method is to run a soundcheck to set all my drum mic channel levels and when I set my drum mix volumes, I pull up my overheads, kick, and snare and then mix the toms as needed.  For example, a song that’s heavy with toms that drive the song would get more volume on the tom channels.

For close miking, I put my snare and tom mics, clipped on the edge of the drum, at about a 45-degree angle to the drum head and about an inch away.

Regarding the microphones to use, here’s a list to consider:

You can also check out microphones by Rode, Telefunkin, Audio-Technica, and Earthworks but the above microphones I’ve listed are some of the most popular at an affordable price point – and they sound good.

This can be looked at on the microphone level or the kit piece level, depending on how you are miking the drums. The fewer the microphones, the more frequencies will be shared and thus decisions have to be made. For example, do I boost 1.5kHz on the overhead or the side-pointing mic in the case of the Glyn Johns technique.

There is a trick I like to use with the toms. Start with the lowest frequency tom, the floor tom, and work your way up through to the highest frequency tom. Start with the floor tom and try boosting at the 140 Hz mark. Once you find the right sound, then move through the higher toms by boosting around 20 Hz higher for each one – 160 Hz, 180 Hz, etc. The key is first getting that floor tom where it sounds right.

Consider the below as a place to start.

When it comes to effects, there are options that may or may not work for you. These are compression, gating, and reverb.

For gating, I add a slight gate to the toms so I don’t pick up excess noise from the other kit pieces. I might also gate the kick drum if I want to accentuate the punch. I might also gate mics used for cymbals to eliminate stray low-end but I could just as easily use a high pass filter to do that.

Compression I use more as an effect but it depends on the drummer. If I have a drummer that’s not hitting the kick with consistent force, I might compress the kick to even that out. If I want to punch up something like the snare, I’ll duplicate my snare channel and put a lot of compression on the second channel. Then I’ll blend the two sounds together.

Note, with all of the options available, it’s easy to forget the drum kit needs to sounds as one instrument.

Finally, we reach reverb. How much, where do I use it, how do you do it? For the most part, when I do use it, I use it on the toms and a little on the kick. The kick will be sustaining enough as is. And this is when you need to have a recording to compare it to and know the vision the worship leader has in mind. And what works in a large sanctuary might not work in a small one. And that leads to….

There’s a lot that can be done with the drums. Imagine it as a big box of crayons and you can color however you want. In the end, what you do is up to you. If it sounds good, it is good. But whatever you do, make sure that the drums on stage are tuned and the skins are good so you’ve got a good sound going to the mixer.

Other Ways to Listen to the podcast: