Moving The Guitar Amp Off The Stage

Moving an amp offstage into an isolation booth can help reducing stage noise, increasing room on the stage, and improving the sound of the amp through the house speakers.  Leave it to Radial to help electric guitarists work with isolation booths.

I’ll leave it to Radial to describe their SGI system…

“The Radial SGI Studio Guitar Interface provides a simple and affordable solution that lets the guitarist plug into the SGI and drive the guitar signal over standard XLR mic cables to a far-away isolated room and listen to the sound over the studio reference monitors.” 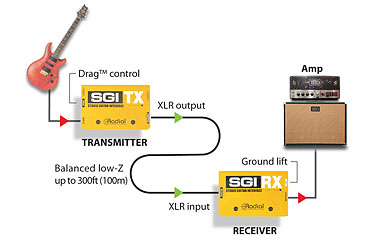 “On live stages, noise typically encountered when using long, high-impedance cables is now eliminated. Add the Radial JD7 Injector to your system and you can now run multiple amps and effects at the same time. Combine the SGI with a Radial J48 direct box on bass guitar and now you can mix the sound of the bass amp and the direct feed to create thicker, fatter tones. Because you are no longer limited to being in the same room as the amplifier, all kinds of new possibilities open up… and just maybe, this will add a little creative spark to the performance.”

“The SGI-TX Transmitter Module: When using the SGI, the guitar connects to the SGI TX transmitter. This is a 100% discreet class-A active driver that employs the same front end and circuit topology found inside the popular Radial JD7 Injector. Class-A circuits are the preferred choice o audiophiles as they retain the natural characteristics of the instrument by eliminating zero-cross distortion which in turn reduces harmonic distortion, inter-modulation distortion and phase shift. To counter any effect of the circuitry, the SGI is equipped with Drag Control, our innovative load correction circuit that reintroduces the natural relationship between the guitar and amplifier that would otherwise be lost. Power is supplied by a 15VDC external supply for added headroom over 9V systems. Both transmit and receive modules are equipped with isolation transformers to eliminate buzz and hum caused by ground loops.”

“The Radial SGI-RX Receiver Module: When in use, the amplifier is connected at the receive end using the SGI RX. This module is completely passive thereby not requiring local power. The transformer receives the signal and is wired ‘in reverse’ to counteract any ringing that may be induced at the input side. Smart. This also eliminates ground loops, a common problem when connecting equipment using different electrical circuit.”

You can read about it here:  http://www.radialeng.com

QUESTIONS: Does Your Church Use Instrument Amp’s Offstage?  If So, Do You Like the Resulting Sound?