Overcoming the Four Types of Self-Sabotage in Church Audio 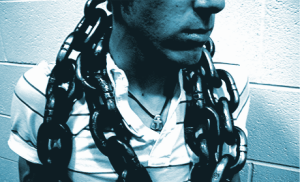 Walking down the sidewalk today, I couldn’t help but feel sorry for the woman ahead of me.  Even though she was dressed quite well, every time she took a step, her right ankle popped inward.  Her problem was that she couldn’t walk in high heels. She had self-sabotaged her desire to appear professional dressed.   It was at that moment I asked myself the question “how do I sabotage my own efforts?”

Sabotage is a deliberate action aimed at weakening another entity through subversion, obstruction, disruption, or destruction.  You sabotage yourself when you intentionally prevent yourself from doing the best job possible.  Imagine putting on a necklace of tow-chains right before running a race!

Here are four ways I see self-sabotage happening in the church audio environment:

1. You place limits on your own abilities based on the quality of equipment you have available.

My work doesn’t matter because…

Yes, there will be times when you don’t get the crisp sound you want from an instrument microphone because of what you’ve got available.  But don’t let that stop you from trying to get the best sound with what you do have available.  Don’t let the equipment be an excuse for limited effort.  I’ve worked in rooms where I had everything stacked against me but through my diligence and desire to get a good sound, I got a lot of compliments after the show because I’d worked hard to make the best of what I was given.

2. You limit the amount of work you do based on how your work is received.  In short, you think if the congregation won’t notice, then it’s not worth doing.

You have been placed in a position where God is using you as His hands.  Therefore, you should be doing everything with Him in mind and doing the work to the best of your ability.  And responding to the above points; it’s more than a concert, it’s a church service…people do listen to the mix, that’s part of what moves them…and when the band gets the praise, it’s a sign you are doing a great job.

3. You do only what works.  You don’t experiment.

A couple of months ago, a musician on a worship team sang the lead on a song for the first time.  It was for the congregation to listen, not to sing along.  Based on the arrangement of the song and the characteristics of their voice, my immediate thought was it was a perfect time to use the radio-voice effect.  It would have fit perfectly.  I wasn’t behind the mixer that day but if I was, I would have tried using that effect during practice.

Feel free to experiment with effects, eq, and even microphone placement.  Your current set up might work, but it could work better.

4. You don’t address your problem areas.

Maybe you have been perfecting your ability to mix multiple guitars.  Maybe you’ve reaching the point where you can produce a solid mix every time. However, if you’re ok with regularly missing microphone cues because you are thinking about mixing, then you’ve got a problem.

For another example, let’s say you are great at mixing everything but the keyboard.  It’s an instrument that’s plagued you.  It doesn’t matter how well you mix the other instruments, if you allow yourself to have that as a problem area, then you’ve limited yourself on how good your mixes will ever be.

Pick a problem area and work on it.  Ask other tech’s for help.  Buy a book on the topic.  Read online articles.  If you’ve got a problem area in live audio production, odds are others have had that problem as well and there are resources available to help you.

Working in church audio, you should always be striving to do your best.  Don’t self-sabotage yourself with one of these common methods.  After all, it isn’t a concert, it’s a church service.