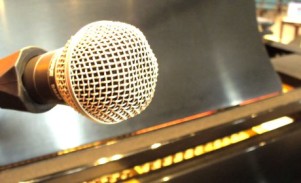 Don’t buy based on brand or price! Photo provided by trublueboy

The typical microphone properties that come to mind include;

You can think of those microphone properties simply as;

Microphone diaphragms aren’t quite as mysterious as the Twilight Zone but they do have several  dimensions to them.

What is a microphone diaphragm 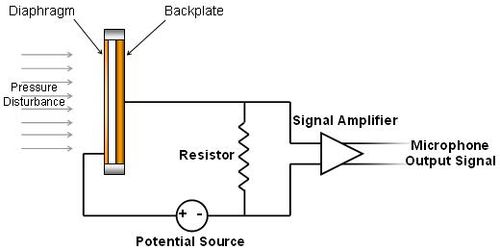 Microphone Diaphragm on the Left.

The diaphragm is the portion of the microphone that receives the sound waves.  It’s the tiny plate that first moves when sound waves hit it.  It’s listed in the microphone spec’s as a small, medium, or large size diaphragm.  Nothing complex…at first glance

The size of the diaphragm makes a difference when it comes to;

It’s a trade-off between one benefit versus another.  For example, a large-diaphragm is more sensitive to sound frequencies but it can’t handle as large of a sound volume as a small-diaphragm microphone.

Time to talk diaphragm properties.  Only when you know how each of these properties affect the microphone can you determine which is right for your situation.

Natural noise of the microphone

Imagine a drum head fit tight on a tiny little drum the size of your hand.  There is maximum resistance in the middle of the drum head.  Now imagine a drum head fit tight on a drum that was the size of a dinner plate.  The drum head on the bigger drum will be a bit more flexible due to its size.  Applying this to the natural noise property, a small diaphragm will create more natural noise as air molecules hit the more resistant surface.

This isn’t necessarily an issue in the live environment but if you were in a studio environment, then it’s something to consider.  That being said, it’s natural noise that’s introduced before the sound even hits the microphone pre-amp.  You could see a 15 dBa difference between a small and large one.

Looking at volume handling, dynamics are the best for high SPL’s but of course don’t get the frequency clarity of the condenser microphones. With this in mind, let’s look at condenser volume handling.

A condenser microphone’s ability to handle volume is limited by physical restrictions and electronic restrictions.  Regarding the electronic restrictions, there are limits set on the amount of the signal that can be handled before the signal clips.  This happens at the pre-amp level.  When it comes to the physical restriction, the natural distance between the diaphragm and the backplate along with the rigidity of the diaphragm (remember the drum head mentioned above) affect the point in which distortion becomes a problem.

Points go to the smaller diaphragm because of a more rigid diaphragm.  This also means a higher dB before clipping

This might seem counter to what’s mentioned for natural noise level, but large diaphragm microphones are more sensitive to sound frequencies.  That is to say that the large diaphragm is easier to move than the smaller one.  Going back to the drum head image, it takes less energy to push into the middle of that drum head than it would the smaller and tighter drum head.

Bigger isn’t always better.  I’m reminded of the popularity of the over-sized drivers in the world of golf back in the late 1990’s.  The concept of those golf clubs was simple; a bigger sweet spot meant a higher probability of hitting a straight shot.  I tried using one my friend had.  I could hit it straighter but not as far.  The extra size meant it was harder to control.  I could hit my 5-wood farther than I could with that driver!

Regarding the frequency range as it relates to diaphragm size, you might say the same thing.  Bigger isn’t always better.

The frequency range of large diaphragm microphones isn’t as great for two reasons;

1. The larger the diaphragm, the less it can move as a unit.  It’s the same principle of loudspeakers in which a large speaker cone can’t replicate high quality high frequencies.  Think ripple-effect.

2. The larger the diaphragm, the more weight there is to move.  So not only is it less likely to move as a unit, it’s not going to be as responsive due to its size.

Where you will hear the impact of the diaphragm size isn’t so much as the overall frequency range, especially when the vocalist is on-axis.  Instead, when singers are off-axis such as when they share a microphone, you’ll notice the larger diaphragm will not be as responsive to frequencies as you pass the 10 kHz mark.

Grab your calculator or a pad of paper, it’s time to do some math.

The dynamic range of a microphone, with regards to the diaphragm size, is calculated by subtracting the natural noise level from the point of distortion.  For example, in the AKG Perception 420, the natural noise level is 16dBa and the max volume before distortion is 155 dBa.  Therefore, the range is 155  minus 16 which is…five becomes four, carry the one, subtract from….139 dB.

You should expect the smaller diaphragm microphone to have a wider dynamic range but it’s better to do the math and determine for yourself as I’m not going to say one will always win over the other.  Of course, I’d rather have frequency range over dynamic range any day…well, most days…well, it depends.

Which diaphragm size is best?

Check out the Vocal Microphone Guide.