Larry Vanerwegen, the TD at Fairway Park Baptist Church, recently completed a sanctuary renovation project.  Being the tech-geek that he is (aren’t we all?), he equated it to building a Holodeck from the old Star Trek television show.  I hope he was referring to the original show with William Shatner and not The Next Generation.  Not that I didn’t like TNG…but that’s a discussion for another time and another place.  Larry’s guest post details, with photos, all he experienced and the psychological effects of such an undertaking.  Enjoy his bits of humor.  Take it away, Larry…

At Fairway Park Baptist Church we decided to update the front of the auditorium and while we had the walls opened up we thought we’d do some electronics updating. We called it being ready for when we install the Holodeck.

Here are the “opportunities” we faced during the transition. Because the work would be done by volunteers (albeit competent ones) led by a licensed contractor, the project would take weeks and many Sunday services with dust on the floor (and everything else). The sound system would change every week partially because we were trashing our 1960’s vintage 2 way speakers with nice new Community V2-3264s and a V2-212S sub. Acoustics would change every week and a large supply of Valium was ordered for the sound guy – me. 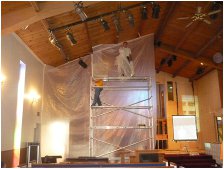 Rather static temporary changes are:

The stage is set

No electronic backing for any of the instruments. I ran a long wire down the side aisle to wire the pulpit mike. The projector was working but the V1.0 screen was REALLY wavy and too low in height. Normally we project the text during corporate Bible reading and we have the congregation stand. Not this week! Add to this mix the Pastor’s old wireless body pack was dying so we got a nice new Sennheiser. It worked great. For five minutes. Then the TV station killed us. I finished the service on the wired pulpit mike. We, or rather I, survived…after we changing the frequency of the wireless body packs.

The new backstage patch panel was installed and I hay-wired a couple of wired mic channels from the patch to get the keyboard/DI working and a couple of soft voiced instruments. Our carpenter was able to straighten the screen somewhat and we figured out a way to get more angle out of the projector without it being in danger of hitting the floor. Considering, the service went well. (Translation: a two Valium morning!) 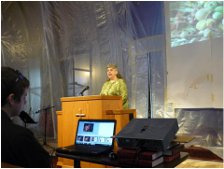 No real changes from the media point of view. The mixer channels were not at all logical as much re-channeling became necessary because of limited FOH runs (someday digital, sigh). Not only was it necessary to move the XLR inputs to the mixer; all the compressor inserts were juggled too. Of course, that did wonders for my gain structure. I would have 3 praise singers grouped nicely on channel 7,8 and 9 and the fourth on channel 30. If I didn’t have sub-mixers I would have been in a world of hurt and the local asylum would have a new babbling idiot! Add to this the changing acoustics as walls were moving around! And room EQ? Forget it!

I spent all day Saturday wiring mike pockets to the new backstage patch. I religiously followed my spreadsheet documentation. Should work first time. Right? Of the first 9 channels, I had 8 pin 2/3 reversals. The ninth channel was just plain open.  Mic jack “C” and “D” were entirely reversed. Somehow I managed to get pin 1 right every time. I was running out of time, so I toned some of the FOH channels without verifying the pins were right. I had tone so I said I’ll lump it. Cut to Sunday morning. Nobody else in the WORLD had 60 cycle hum because I had it all. Someone, whose name I won’t mention, plugged the dbx 231 house EQ into a different AC circuit than the house amp. Can you say textbook ground loop?

Nobody else in the WORLD had 60 cycle hum because I had it all.

Last week of the church divided (with plastic). The system worked as well as could be expected but somewhere between sound check and the service, all the music and  player’s staging changed. It is normal for a certain amount of off script activity during a service to occur, such is the working of the Holy Spirit. But the entire music staging plan?  AAARRRRRGGGGHHHHHHH! The lighting guy laughing his head off at my anguish, cause his stuff is working! (I can “fix” that!) After the service the wife said I was babbling incoherently. (More than usual; a three Valium morning) 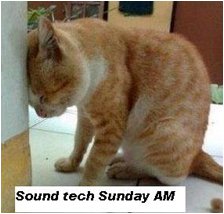 The Plastic is down, the projector is back in its mount, all the video distribution stuff is now in play again and the video is jittering left/right. [sigh] Even the computer operator’s second screen (mirrors the projector) is jumping. I reboot the computer, VGA amp/splitter, the NTSC down converter, the NTSC modulator (on campus distribution), the KVM switch (installed so a transient speaker can jack his laptop in and use the video system). It’s still jumping. That happened once before….. What on earth did I do to fix it?

Getting late so I plug the projector straight into the second VGA port on the computer. Stable. But the video distribution is down. We get through the service. At least I think we did. I am on too much Valium. Later to find out the aforementioned KVM switch draws its USB power from the computer we use to record the service with Audacity. That computer was turned off. Guess what happened when that computer was powered up and all the video system plugged back up!

Saturday, all day. Thanks to the carpenter, Pastor, myself and couple of kibitzers wandering in and out we get the new speakers up (excluding the sub). I had proved out more stage channels to the patch panel. Proved out more patch to FOH runs. Its 5 PM and I have a minimum system. Sunday morning, the keyboard guy comes in and is warming up, I turn up his channel to the new speakers. His mouth drops open. “WOW!” He says, “That sounds so full”. (Duh, Ya’ think that was my plan?) but the piano mike is dead as well as the right side praise singers. I just KNEW it was too easy.

Wireless mics put the praise singers back in the game. Because of the black spaghetti behind the mixer from repeated cross patching the piano is on its own! Ok, sound check is done. A quick dose of caffeine and we are in the service. Turn up the KB/DI channel. Who put that 60 cycle on there? No music at all, just hum. FER’ CRYIN’ OUT LOUD….. IT WAS WORKING! (bad cable from DI to patch. Orchestra pockets not yet wired.)

Spent Saturday cleaning up the black spaghetti on the back of the board. Everything started working right! Go figure! Pastor and I were chatting how they are going to get the sub flown….safely…. Pastor says we’ll leave that to the “crazies.” (I wonder who he was referring to?) They did it, safely, and the sub is working. Since we service the projector twice a year, we set up a plan to check all speaker mounts for issues at the same time. The mounts are loaded with Locktite but ya’ can’t be too sure. All the electronics are properly AC grounded. We added lots of AC outlets and even ran a lot of CAT5 to the four mike/Speakon/RJ45 stations. The CAT5s are for the future. Everybody is beginning to run all sorts of stuff over CAT5, snakes, computers, video, so with the walls open it only made sense to “over pull” and be ready for the holodeck. The electrician provided “private” AC for the electronics, so avoiding ground loops, buzzes and bleeps, wasn’t hard.

Sunday Morning all the primary systems were working for the first time in weeks I had all mikes and DIs working. I got most of the gain structure squared away by the end of sound check. It sounded GOOD. For the first time I could get stable adequate volume out of the wired pulpit mike. The old mikes don’t sound so bad after all! All the heavy EQ I had on the channels to work around the old speakers came off. Channel EQ became “accents” like they should be. House EQ is set flat right now because I haven’t white noised the thing. Then, I should be really good. Santa brought me a 16 channel 100ft snake. Oh Boy! Can’t have enough FOH/stage channels! Santa WILL get extra cookies Christmas night! Lots of chocolate! 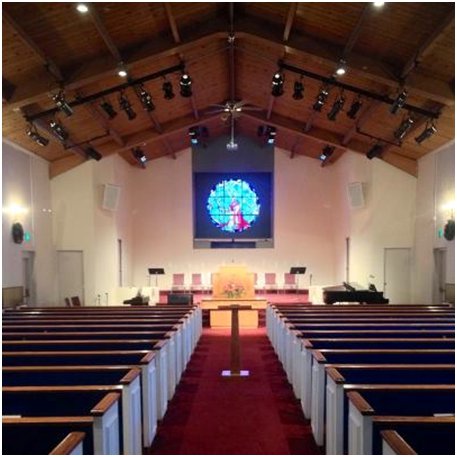 And now the dust has settled, I no longer require Valium, the work is done. The lighting guy smiles as he turns up his lighting computer, and it works. The Power Point guy is happy, what’s on the big screen matches what he saw on his computer. All my mic runs work, the new sub thumps nicely and there are no more temporary wires laying across the stage (or backstage). I have control of the orchestra mix and even the nursery monitor works right. While there was a lot of work and “How are we going to do that” anguish. We smile. Because now we can concentrate again on using all this stuff for the glory of the Lord in our attempt to follow the great commission.

I praise the Lord for a team to do all this. A team not just to keep the peace, but one that left our on-the-job conferences shoulder-to-shoulder ALL convinced we were going forward with the right solution. It took a lot of KFC, Pizza and prayer but it’s done. Would I do it again? In a New York minute.

[Note from Chris: Thanks, Larry, for all the work you put into this (the article and the renovation).]