Radial is like Taco Bell. The restaurant franchise cranks out new variations of meat, beans, rice, and vegetables in surprising ways and Radial is no different. How many ways can you transform audio signals? Two more, according to the latest press releases. 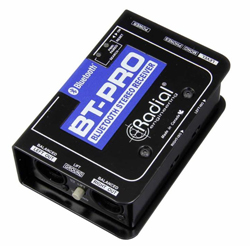 The first offering is the BT-Pro Bluetooth direct box. Yep, Bluetooth. Let’s say a digital device needs to send audio to the console. It’s great to have a hard-wired connection but that’s not always available or the best method, especially when the audio is provided by the person on stage.

Radial allows for a secure safe connection by using a pairing process. Here’s the skinny on the setup:

The BT-Pro converts the data to a stereo analog signal, producing up to +4dB at the output. The signal level is controlled by a potentiometer shared with the built-in headphone amp. This uses a standard 3.5mm mini TRS.

A stereo-to-mono switch enables the input for dual-mono operation to reduce input requirements on the mixer or split the signal to the PA and monitors. Should noise be encountered, two side-mounted isolation transformers may be inserted into the signal path. This is augmented with a ground lift switch for the XLRs to further help eliminate ground loops. 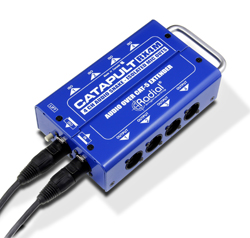 I’ll be honest, I had to re-read the press release because it seemed too brilliant and too simple. In short, turn any standard cat-5 shielded twisted pair cable into a four-channel digital snake. Signals can be sent via analog or AES digital audio signals. Just get an Input and Output box for each end.

Each INPUT module features 4 XLR inputs and two Neutrik Ethercon outputs and 4 additional XLR outputs. Output modules feature Ethercon input, throughput and two sets of XLR outputs. These may be ordered without transformers for sub snakes or to transmit AES audio signals; with mic isolation transformers for signal splitting between front of house, monitors or the recording system; or with line level isolation transformers to eliminate system noise. A ground lift switch is available at each end for the Ethernet cable connection to help eliminate hum and buzz caused by ground loops.

You’ll notice there are no links to these products.  It’s because they are so new.  Radial doesn’t even have anything on their web site.  Bugs me when companies do that, but so it goes.