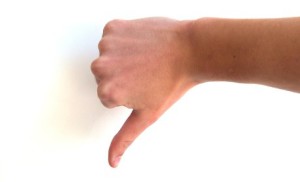 Don’t let one person’s opinion define the quality of your work. Photo provided by Daino_16

Breathe in. Breathe out. It’s ok. They simply don’t understand.  They think anyone can operate a mixing board.  They think all microphones work the same way.  They think…oh, you’ll find out soon enough.

Lately, I’ve been in a writing rut because I’ve been frustrated at things I have seen and experienced and I’ve let it get the best of me.  I tried writing a Top Ten FOH T-shirt Quotes and found myself writing #2 as “LEAVE ME ALONE, I KNOW WHAT I’M DOING!”  It wasn’t until my mother called me for help with a portable sound system that I had the “AH HA” moment that’s pulled me out of this rut.

My mother called me because her Garden Club was using a portable sound system for meetings and they were having problems.  The problems were focused around feedback and people having a hard time hearing the sound from the sound system.  She said “We aren’t sure what to do because every time the person turns their head away from the microphone, they can’t be heard in the sound system.” AH HA!  She thought audio work was easy.

This is when I started considering all the things I’ve heard people say (or have heard other tech’s experience) and I looked at them through the lens of someone who thought live audio production was easy.

Consider these comments coming from people after the service.

How would you respond on hearing such comments?  Would you think any of these thoughts?

This is hard work!  What do they know?

They think they know your job.  And, they think it’s easy.

Back to the Garden Club

I gave my mom a few bits of advice for her Garden Club and using the portable sound system;

For people like you and I, that advice seems so basic.  It’s stuff we know to do without even thinking about it.  But for the Garden Club, they used my advice and for the first time had a feedback-free, easy-to-hear sound system experience at their next monthly meeting.  They discovered that audio work isn’t as easy as you and I make it appear.

The next time a person comments to you on your mix, or the equipment, or in any way causes you to be frustrated at what they say, relax.  Consider the person who says it thinks they can do it themselves.  Then imagine what would happen if you put them behind the mixer for a full church service.  Relax.  Breathe in.  Breathe out.  Move on.*

*Yes, there are times when people complain for the right reasons. I’m all for taking corrective measures and owning up to mistakes.

**EDIT: My friend Brian made a great observation after reading this article – ‘it’s our job to make it look easy.’ In that regard, the easier we make it look, then the more likely others would be lead to think it is easy. Oh, if only it were so…