Perspective and Perception: Keys for Resolving Problems Between the Tech Team and the Band 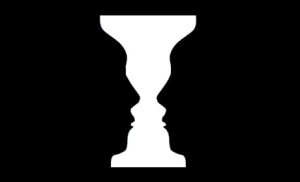 Do you see a vase or do you see two faces?
It comes down to perception.

“All I hear is the guitar.”

It’s all about perspective and perception

If I had a nickel for every time I’ve gone into a church and heard three or more different perspectives on the way things sounded I’d be pretty well off by now. Don’t think your church is unique with your own sound problems. I’m here to let you know that your church is no different than any other church in this area. So take heart. This isn’t an unsolvable situation. In fact it’s a very common problem, not only in the church sound world but in the secular world of touring professionals.

Sound is very much a matter of perspective and perception. No two people hear the same thing the same way.  Everyone has their own natural biases based on their environment, their physiology, and their flat-out personal preferences.

Likewise, the perception of what we hear depends significantly on the emotional impact of what we hear, especially when it relates to worship music. Because worship music, by its very nature, is designed to get you in the very dark recesses of your heart and soul, what we hear when we listen to worship music is very, very personal. What one person likes in a worship song performance can be totally different than what someone else hears in that same song.

People hear different things. You can play the same song through the same equipment, having people sit in the same spot and get different perspectives from every single person. Now contrast that perspective/perception idea with how, we, as church technicians, listen to our mixing.  We’re used to thinking in terms of bits and bytes. This thing called sound throws us a paradigm shift in that we have to feel instead of think. We go from digital, 1’s and 0’s, black and white thinking to analog thinking; wavy, lots of gray feelings. Standing behind the mixer, you are making judgment calls as to what is right in the mix.  You are ruling, “this is right for this music set, for this congregation, for this moment.”  It’s a tough thing to do because of our personalities, introverts that we are. But it’s something we need to conquer if we’re going to be good at what we do and bring the congregation into transparent worship.

Part of the uniqueness of the church environment is that volunteers are often thrown into the deep-end with the technical as well as the worship side of audio production. Thus, whether you are a musician or a sound tech, you don’t know what to expect from the other side of the sanctuary and they don’t know what to expect from you.  Therefore, each person incorrectly forms their own perspective of what they need, or feel that they need. After a while of back-and-forth wars (for want of a better phrase), a perception appears that both sides don’t care about other side.

Considering each person’s unique perspectives, perceptions, and expectations, conditions are ripe for total disaster when no one is ready step up and strive for resolution. Let’s consider the worst-case scenario…

Neither perception is accurate!

The problem is that because each side is only looking at the situation from their perspective, feelings get hurt, animosity builds, and the transparent worship that is needed to draw people into Christ…it gets lost.

Solving these types of problems is relatively straightforward. Here’s what I do when I intervene for helping resolve an issue like the “worst-case scenario” which I just outlined.  It works with most perspective-based issues…and aren’t most issues based around differing perspectives?

1. Gather the team leads together with the pastors.  This is the core group with which you’ll work through the problems.

2. Pray as a team for guidance, unity, and resolution. NEVER start a meeting like this without praying first. At the very least, it helps to set the expectation that we’re doing this for God’s glory, not for us as individuals.

3. Sit both sides down and listen to each side’s perspective about the issue. With this step, it’s important to have everyone be as honest as possible, knowing that only through honest communication can the issues be put on the table to be solved. The idea is focusing on the issues, not on the personalities. This is where the pastor can be a big help. He can help steer the conversation back to the issues so as to remove the personal confrontations. Each side needs to be respectful and just listen while the other side speaks. Remember this is about understanding the perspective and perception of the other side. I’ll usually make notes of both sides point of views.

4. Reaffirm the commitment to work this out as a team for the good of the congregation and for the glory of God. Whatever it takes to get to that point is what both sides need to agree on and being to work toward as their only goal. Without this level of buy-in, the resolution is doomed for failure.

5. Consider the other’s perspective. I usually ask the question of the tech team, “Have you been on the stage listening to what the worship team is hearing while they are practicing?” I ask the same question of the musicians, “Have you heard the full band play while you’ve been in the audience and in the sound booth?” Ninety-five percent of the time, the response I get is “No.” So the initial step in achieving perspective is having the tech team go on-stage at each musician’s position and listen to what the musician is hearing, both from front-of-house and from their monitors. Then I have the musicians each come out into front-of-house and into the sound booth to hear what the techs hear. It’s important that there is a replacement musician playing the same position as the musician who steps out so that they can hear what they would sound like.

By altering the perspective of the teams, the perception starts to change. Now having “walked in their shoes,” each side can understand the balance that’s needed between the worship team needing to hear themselves clearly and the tech team needing to have volumes on stage low enough to provide good clear sound in the house without having to blast everyone out of their seats.

6. Time for fine-tuning.  Now that everyone’s perspective has been altered, they can start working as a united team to fix what’s broken for the good of the congregation. This is where you should walk everyone through six crucial steps;

Only by understanding the other person’s perspective, and by doing that, understanding their perception of sound, will you be able to achieve a harmonious working relationship between the worship team and the tech team. Each side brings unique talents to the table that the other side doesn’t. Respect that and work as a team and worship will become more than a sum of its parts.

Brian Gowing has helped over 30 churches meet their technology requirements. Brian works towards shepherding the church, analyzing their technical requirements, sourcing the equipment, installing the equipment and training the volunteer personnel.  As he likes to say ‘equipping the saints with technology to help spread the Good News.’ You can find the original article here.