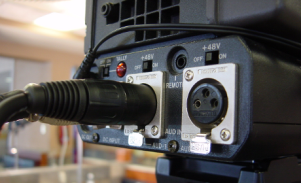 Water was streaming out the end of our driveway.  The main water pipe going to the house had sprung a leak.  There were only two ways of fixing the problem; digging up the driveway for finding and repairing the leak or running a new line without disturbing the driveway at all.  A problem with an audio cable isn’t always solved by running a new cable.  Sometimes you’ve got to look under the driveway.

There are six common cable problems you’ll find when working with audio.  All but two of these show themselves by not passing audio through to the mixer.

1.  A bad cable.  This is usually an easy one to spot and resolve.  If no sound is coming through from the sound source and everything else checks out ok, then swapping in a different cable usually solves the problem.  This goes for all cable types, from XLR’s to TRS cables.

2. Wrong cable in use.  A TS might have been used instead of a TRS or vice versa.  Make sure you use the right cables and check the user manuals for audio equipment if you don’t know which to use.  An easy way to avoid this with stage cabling is by keeping cables bundled with their appropriate equipment whenever it’s taken off the stage.  You can also label inputs/output, if they aren’t already labeled, by using a bit of tape and a Sharpie to put on the bottom or back of the electronic equipment with a note as to the cable type.

3. Plugged into the wrong place.  This typically happens when you plug an input into an output jack or vice-versa.  It’s easy to do this with DI boxes if you don’t pay attention to what you’re doing.  I’ve probably set up DI boxes a thousand+ times and it’s easy to zone out.  I’m just sayin’.

4. Seating.  You might not hear any sound because the cable was not properly seating in a piece of equipment.  This usually happens with guitars/basses when they plug the instrument cable into their ax.  Whenever I’m not getting a signal from a guitarist / bassist, this is the problem.  I’ll ask the musician to re-seat the cable.

5. Hum in the channel.  This can happen for a variety of reasons.  If it’s because of the cable, it’s likely an unbalanced cable that’s running parallel to another unbalanced cable or electrical cord.  Cross those cables at a 90 degree angle and secure the angle with a little gaffer tape.

6. Cable used incorrectly.  You’ll see this problem occur more in the booth than on the stage.  A perfect example is connecting an ipod to the mixer.  You can’t just plug a stereo TRS cable signal into the mixer.  The mixer is expecting a balanced signal via the TRS cable but you’re giving it a stereo signal.  This can cause intermittent audio or generally poor audio.  Fix by using a task-appropriate direct box or other transformer.  You can read more about ipod connections here.

For more information on audio problems, check out this article on resolving line check problems.