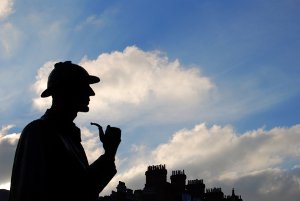 Everything breaks for a reason…
but what was the reason?
Photo bygrim12

The third installment in this mystery series still has me shaking my head.  The sound check began just as it always had but a few days later, I would be armed with a vacuum cleaner.

The sound check started like every other sound check.  A few minutes into it, a microphone channel went out.  More accurately, I stopped getting a signal from a vocal microphone.  We had one microphone with a plug clip problem and every now and then a singer would grab the microphone and the XLR cable would work loose.  If only that was the case.

I muted the channel, ran up and re-seated the microphone.  Then it’s back to un-muting the microphone and trying again.  Nothing.  MUST BE A BAD CABLE!

Back to muting the channel and replacing the mic cable. [Chris, not so gracefully, runs to the production closet and grabs a different XLR cable].  Easy breezy solution?  Ummm….no.  The microphone was still dead.  Bad microphone?

I swapped microphones on the stage so this “problem microphone” would go into a working cable.  It worked.  At this point, I figure the problem is anything from the stage jack to the snake cable to the mixing console.

This was a problem that I’d have to investigate later in the week.  For now, I put that microphone into a different channel (and naturally different stage jack) and we continued on with the sound check.

I wish I had a camera

Wednesday evening, I dropped by the church to sort out the problem.  I ran a single vocal microphone through the jack and tested it in the system and I still did not hear a thing. So much for miracle fixes.  At this point, all of the remaining areas which could be the problem were all “fixed” equipment.  That is to say, everything in the signal path, from the stage jack to the mixer, was kept plugged in or wasn’t even accessible to unplug.

First stop, the stage jack.  I popped the metal floor jack out of the floor and checked the connection…all looked good.  And here’s where it got interesting…

I decided to check the snake head underneath the stage.  Several years early, we had performed some upgrades on the audio system, new mixer, new rack equipment, new personal monitor system, and new floor jacks on the stage.  The connection between the stage and the sound booth was via an audio snake with the snake head sitting directly under the stage and then cables being hard-wired to the jack on one end and then simply “plugged into snake head.”

I popped off the stage plate covering the snake head and I couldn’t believe what I saw.  Could this be the source of the problem?

Looking down, I saw the snake head lightly covered in sawdust from when the panel opening was cut out during the upgrade/renovation.

While I admit much of our audio upgrade was performed by volunteers, we had a great group of skilled workers.  They would never saw over the audio snake head.  But then I noticed something that explained the sawdust…just below the opening was a support joist with a mound of sawdust.  As it turned out, the hole was cut before the snake was put in place but no one ever thought to clean off the sawdust from the joist.  A few years of drums, electric bass, and a whole lot of walking on the stage was causing the sawdust to fall onto the snake head.

At this point, I still had not found the audio problem.  But, confronted with what was before me, I had to clean up the mess.  I vacuumed up the remaining sawdust on the joint and then turned my efforts to the snake head.  After everything looked clean, I decided to go one step further.

I unplugged all of the cables going into the snake head, vacuumed out the remaining LITTLE amount of sawdust, and plugged everything back in place.  Then I did a quick test of the microphone and IT WORKED!

It shouldn’t have worked.  The XLR cable was securely seated in the snake head before I unplugged it.  It had been working for years.  However, after unplugging, vacuuming, and reseating, it worked again.  Some how, some way, the sawdust did something.  Had it been there when the cables were first plugged in and something happened over time?  Did moisture from humidity come into play?  Was it something else I didn’t see?

Ok, so the mystery of the problem was sort of solved.  That signal path was now passing audio again.  Who was I to question why?

Moral of the story

Whenever you encounter the odd problem that doesn’t have to impact your event, work around it, take note of it, and move on.  When you do have the time to investigate the problem, take your time and work through the signal path.  That’s how the source of most problems is found.

For the last post in this series, I’m pulling in a story from a fellow sound tech who solved a mystery that had the whole band baffled…and probably got a few laughs when he explained the mysterious source of the problem.