Have you ever wanted to “go all Hulk” on an acoustic guitar by smashing it into tiny pieces? Ever had a time when every change you made to a guitar’s EQ only made it sound worse? Let’s look at the possible reasons for your frustration and what you can do to get the sound you want.

There are three reasons for a bad sound coming from an acoustic guitar.

Guitar strings wear out. Once they go bad, you can’t get a good sound from them. There isn’t much you can do with your mix for that day. However, you can talk with the musician and let them know they need new strings. Every 3 months or every 30,000 strums.

Acoustic guitars which have built-in electronic pick-ups or have pick-up’s that were installed after purchase can be a reason for a bad sound. You can pay $100 for an after-market acoustic guitar pick-up and you can spend a lot more. There is a difference in the quality of sound. And, there isn’t much YOU can do when it’s a lesser-quality device.

When it comes to “self-installed” pick-up’s, a variety of problems can occur. The problem is that musician’s are cheap. That might not be a good way of saying it. I’ll phrase it this way…given the availability of small pick-ups, low prices, and a variety of youtube videos, a guitarist can install electronic pick-up’s easily and in-expensively. How do they sound? I’ve hear the good and the bad. These pick-up’s are installed by gluing or taping them under the bridge, inside the body of the acoustic guitar, and then wiring them to a plug.*

*I’ll tell you a secret. I’ve got a guitar like that. It sounds great with a bit of EQ’ing.

If you have an acoustic guitar that sounds good one week and then you can’t EQ it to save your life the next week, talk with the musician about it. It’s possible one of the internal pick-up’s have fallen off. They likely installed two or three so when one isn’t picking up the required sounds, you are losing a lot of frequencies in your channel.

This is an easy one to overlook and a perfect example of how you need to think outside-of-the-box. An acoustic guitar, with an on-board EQ, should send you a great sounding signal, right? You’ve got all the functionality directly at the source. You’d think by the time it comes to you; you’d have a great sound.

I’ve seen acoustic on-board EQ’s with the frequency bands all set at zero, pushed all the way down, and pushed all the way up. The issue is the musicians are likely only playing plugged in during their time at the church. As far as they are concerned, there isn’t much of a reason to mess with their on-board EQ. Yet, if the frequency bands are incorrectly set, then you’ve got a bad sound you’ll find impossible to fix.

The easy answer to this problem is asking the guitarist to set all of their frequency bands to the zero mark. This means the frequency band is being neither cut nor boosted. Now you have a decent baseline sound to start your mixing.

But let’s not leave it there 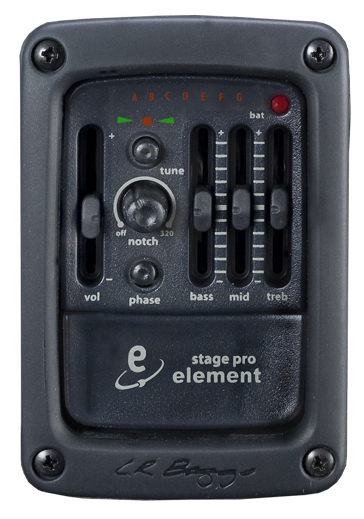 Let’s look closer at the on-board EQ controls of an acoustic guitar. As you can see in this picture, there are controls for;

This control reverses the phase of the signal. In a loud enough situation, the top of the guitar can be affected by the house speaker volume.

This particular guitar EQ has a notch filter for removing feedback. While feedback control is something you can perform on the mixer, in this case, the musician can take a role in eliminating it. By sweeping the feedback filter around, once they hit the frequency that is feeding back, the notch filter will cut the frequencies around that narrow area…no more feedback.

The low, as well and the mid and high frequency bands, are going to be defined a bit differently from one piece of equipment to another. However, good averages are used here and are good enough for your needs.

The mid-range EQ gives you a control of +5 and -9 dB at 1 kHz. I know, I know, even *I’m* wondering “why more range in cutting than boosting?” I’d wager a few guesses but I’d rather move on.

The high EQ gives you a control of +/- 12dB based around an unknown frequency point. Honestly, I’ve read through the manual and it doesn’t say. Most likely, we are looking at the 10 kHz range.

Let’s say you are getting a bad sound from the guitar and it’s not the strings and it’s not a poor pick-up. At this point, it’s time to talk with the guitarist. Follow these steps;

Instruments sound a certain way for a certain reason. Doesn’t assume the bad sound you are hearing from an acoustic guitar is a bad sound you’ll always have to hear. Do what you can to fix the sound at the source during the sound check. Whatever problem still exists, well, you can talk with the guitarist after the church service. And if you have a guitarist who refuses to put new strings on their guitar, I have a pair of wire cutters you can borrow.