Tech Gossip: What Others Hear You Say 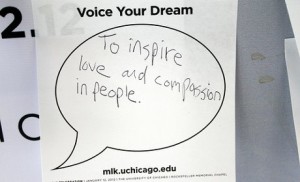 Gossip or inspiration? Your choice.
Photo provided by quinnanya

The topic of gossip isn’t one you’d expect to see on a church audio blog.  Then again, it’s not one I expected to write. Back in December, I was sitting in a coffee shop and reflecting on the different churches where I’d been involved in audio production.  I remembered the struggles I’d had with equipment and occasionally with people. And I remembered the words I’d muttered to my cohorts within the sound booth. That is to say, the words I shouldn’t have said.

Was I gossiping? Not in the way gossip is usually portrayed.  I wasn’t saying stuff like “I heard that so-and-so is…” It was usually something regarding the skill level of a band member.  And not in a good way.  Was I then gossiping?  Yes.

Wikipedia has a wonderful phrase concerning gossip; “It is one of the oldest and most common means of sharing facts, views and slander.”  Views, rather right or wrong, aren’t always something you need to give without asking. Let’s dig a bit further into this.

If you were a first time visitor, how would such talk affect your view of that church?  What if this was your first time ever attending a church?  Would such actions of a production team member be a good reflection of God’s love?

But I Have Good Reason to Complain!

Let’s be honest, audio production can be stressful and there are times I’ve wanted to put a musician into a garbage can.  You need to blow off a bit of steam.  You need to vent your frustrations.  But is doing that in front of others the best time to do it?  Ask yourself this question; “are my frustrations always valid?”  (Wow, I sound like my wife – but that’s a good thing.)

Working behind the mixer, you want the musicians to give you their best sounds and you want them playing to the best of their ability – sometimes you wish they had more ability.  You can’t create a wonderful sound if they don’t give wonderful music.  But not all musicians are professionals.  Not all singers have had vocal training.  Not all worship leaders know how to arrange songs. And what about those scheduling nightmares where you don’t even get a schedule?  Don’t those people know how important that is?  But those people also have families and other responsibilities.  And life events sometimes make doing the smallest things seem like a chore.

Some of the audio techs I respect the most are those who know how to show love and compassion.  They aren’t quick pass judgment or to pass on their views of a situation, especially in the heat of the moment.  They treat everyone they see with love and compassion.  Will they later blow off a little steam? Some do and some don’t.

The responsibility portion of all of this comes down to loving the people, showing compassion, and respecting the reverence of the church service.  It took me a while to learn that lesson but once I did, I was the better tool of Christ.

I’m not saying it’s bad to vent to your fellow techs.  I am saying you need to consider the time and place for such venting.  I’m also saying that the older I get, the less that frustrates me.  For example, if a singer gets a bit pitchy in a song or I miss a mic cue, that frustrates me.  At the same time, if the congregation was really into the worship that day and they weren’t affected by those issues, then it was a good church service for them and that’s what counts.

Consider your Criticisms: Take Action or Let It Go

Every criticism you have of a worship musician, fellow tech, church staff, or even the pastor should give you pause to ask the question, “what action can I take to improve this situation?”  List out your frustrations.  Review this and look for actions you can take.  Would a short conversation with a person help the problem?  Do you need to teach someone how to do something?  Do you need to let it go?  There are things that bug me to no end but ultimately, they are out of my control.  Talking about them, especially in front of others when I’m in the sound booth, won’t help anyone and will only shed a negative light on the person or the situation.  And the older I get, the easier it is to accept those things and let them go.

Church gossip is thought of as talking about people regarding things that may or may not be true and doing so to cast a bad light on them.  Tech gossip can be thought of as giving negative views on people, situations, and even your particular church, while working in a church ministry.  The walls around the sound booth don’t stop the sound of your words.  But they do give you good reason to consider your words before you speak them.