The Amazing Audio Adventure of Fletcher and Munson 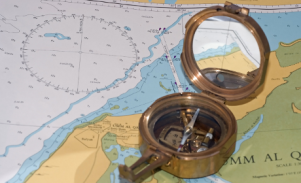 I’ve never told the musicians why I walk out on them.  Even if I did, I don’t know if they’d believe me.  They aren’t around, so I’ll tell you.  I do it because of Harvey Fletcher and Wilden A. Munson.

Harvey and Wilden were navigating through the Amazon rainforest in 1937 when they stumbled upon a one-of-a-kind find.  Hidden behind a thicket of brush and guarded by snakes (“why did it have to be snakes?”) was a golden chest.  Inside the chest they found a sheet of papyrus with symbols.  They knew it had to have the utmost importance if it was kept in a solid gold case.

After months and months of work decrypting the symbols, Wilden was hunched over his old maple desk when exclaimed “I’VE FIGURED OUT THE SYMBOLS!  LIFE WILL NEVER BE THE SAME AGAIN!”

Ok, that was a lie about Harvey and Wilden.  However, they did make a discovery that’s changed how you have to consider sound when mixing.

They discovered that people perceive frequencies at different volumes depending on the frequency.  For example, a frequency of 50 Hz played at 70 dB is perceived to be the same volume as a 1000 Hz sound played at 40 dB. 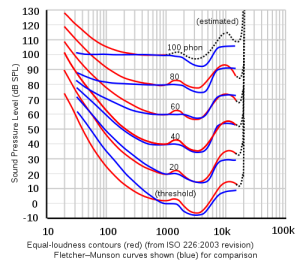 Looking at this chart, you’ll see that as the frequencies decrease (to the left) and increase (to the right), the volumes start increasing so they are perceived to have the same sound level.  For example, a sound at 1000 Hz at 80 dB SPL appears to sound as loud as a 100 Hz sound at 90 dB SPL.

In the interest of science, please note the two different sets of lines.  The Fletcher-Munson data is charted against revisions that were made in 2003.  However, the concept behind the “Fletcher-Munson Curves” is still valid.  Due to the difference, it’s common to refer to the lines as the Equal-Loudness Contours.

What does this have to do with leaving a room during mixing?

Ear fatigue causes us to not hear sound in the same way we do when we are fresh.  Let’s say you’ve been mixing a loud band for good amount of time.  You will experience TTS (Temporary Threshold Shift) which is an upward shift in the threshold of human hearing.  In not-so geek-speak…what you first hear as loud becomes “normal” after some time.  As you know, continual exposure to loud sound can cause temporary and permanent hearing damage.

The problem is that TTS means you start hearing frequencies differently than when first started mixing.  Now, out of natural instinct, you want to make those highs and lows pop so you boost their dB’s even more.  Looking at the Equal-loudness curve, you could be pushing some seriously high decibels and not only increasing fatigue but you are killing your mix.

Think of it like this…what you mixed at the beginning will start to sound different to you as your ears fatigue.  You want to tweak the mix but your baseline is still the same but you are perceiving it differently – “please step away from the mixer“.

The next problem with extended mixing without breaks is you get too comfortable with the sound.  The longer you listen to a sound, the more comfortable your ears become to what you are hearing.

Driving to church, you’re listening to a Hillsong album.  You pull into the parking lot with “that sound” in your head.  You want to mix your guitars and drums just like that.  Thirty minutes into the mix you lose that sound.  It’s not that you can’t mix just like that; it’s that your ears have become comfortable with the vocals and the instruments and you THINK you’ve got everything dialed in.

How do you know you’ve lost your desired sound?

Walk to another part of the church for a few minutes.  Get out of sanctuary and find a quiet environment.  Let your ears reset.  You can also listen to music with headphones that’s the desired sound you want (a baseline sound).  Personally, I’d opt for getting away from music altogether for a while.  Another recommendation I see from studio engineers is make a cup of tea/coffee and talk with people so you are in a normal volume environment for a while.  Then after a few minutes, walk back into the sanctuary.  Does it sound like you want?

Working in the live environment usually means you don’t have a lot of time to leave the booth.  You don’t always need to leave the booth either.  Some days, you’ll dial in the mix and everything will be right.  However, on those days of long mixing / tweaking during rehearsals, especially when you just can’t get the sound you desire, step out of the booth and let your ears reset.

Question(s): Have you ever had your mix fall apart during extended mixing sessions?