The Crossover Basics and Resource Guide 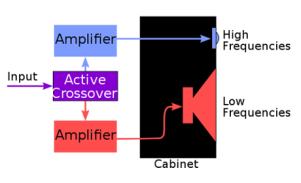 The first time I heard the word crossover was in the context of “Chris, plug those into the crossover unit.”  I was clueless.  I was helping with a live gig setup and even after being told EXACTLY where to plug in the cables, I still didn’t know what the crossover unit did.  Funny thing about it, crossovers are easy to understand.  Implementation…well, that’s a bit harder.

What is a Crossover Unit?

A crossover unit takes the incoming audio spectrum signal, everything from 20 Hz to 20,000 Hz and splits it into two or more bands.  Those new frequency bands are then sent to different loudspeaker drive units that are created specifically for those frequencies.  Think about home stereo units with midrange speakers, tweeters, and subwoofers.  The tweeters are dealing with high frequencies, the subwoofer with the low end, and midrange with midrange.

Why not send all frequencies to one speaker?

Once upon a time, the television show Mythbusters attempted to shatter the windows of a car.  Their theory was simple; by creating a low-end speaker so powerful the sound waves would be so great that they would shatter the car windows.  How big was their sub speaker?  About five feet wide.   While their effort was applauded, I think the implementation was messed up, but that’s another story.  The point is that in order to create low-end frequencies, you need to move a lot of air.  The same can’t be said for high frequency sounds.

A tweeter can’t create the intense low-end energy.  Also, subs can’t create accurate high-end frequencies.  The reason is as the frequency of sound generated by the drive unit increases, the cone stops moving as a unit.  Think of it like a circle of waves.  This is called cone breakup.

A crossover unit enables you to get a great sound because you are giving the right frequencies to the right speakers so they can do the best job of creating the sound.

Other features of crossover units

If only crossover separation was that easy

It’s Thanksgiving dinner and a surgeon offers to cut the turkey.  After carefully slicing it apart in a beautiful array of pieces, everyone claps and says it’s truly the work of a skilled surgeon.  The surgeon’s brother-in-law says, I’ll be impressed if he can put it back together.  Thus, the issue of frequency summation.

“There is of course much more to a crossover than simply splitting the audio signal into separate frequency bands.  The vital point to understand is that the splitting has then to be followed by summation.  The frequency bands have to be joined together again seamlessly.  This requires the acoustic signals be summed to be correct not only in amplitude but also in phase.” – The Design of Active Crossovers (Douglas Self)

The problem is that because you can detect sound differences between your two ears then frequency summation must occur in the right places in the church sanctuary so as there are not time or phase differences.  And that leads me to tell you about a Christmas gift I received.

The day before Christmas, I opened my front door to see a package on my porch.  It wasn’t for the kids.  It wasn’t for our family.  It was for me!  And it was HEAVY!  I brought it inside and quickly busted open the box and saw a nice letter from Elsevier.  Elsevier is not one of Santa’s elves.  I’m going to say Elsevier is the patron saint of audio books.  The fine folks at Elsevier (owner of Focal Press) gave me a selection of pro audio books for review.  One of the books was “The Design of Active Crossovers” by Douglas Self.

In the book, Douglas Self covers crossover basics, how loudspeakers work, crossover requirements, crossover types, types of filters, designing filters, equalization, and design.  This is not a light book by any means.  It’s 500+ pages of crossover goodness with a wealth of charts and graphs which make it easier to conceptualize key concepts.

A crossover unit gives the right frequencies to the right speakers so they can create the best sound.  Using a crossover unit is more than just plug-and-play.  It’s plug-and-configure.  It’s a science.  Whether you already have a crossover unit or are looking at upgrading your existing speaker system, consider adding “The Design of Active Crossovers” to your bookshelf.  I’ve added it to mine.

The book is available in both hardcover and digital format.