The High-Pass Filter: A Sound Board’s Most Underused Button 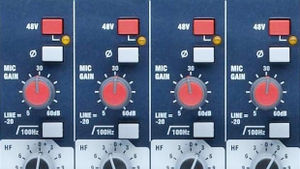 One button that still looks pristine.  No fingerprints.  No worn finish.  It doesn’t even have a name.

Working in audio, it’s easy finding my way into a foreign sound booth.  It could be it’s my station for an event or it might be that I’ve been invited in by the sound tech on duty.  Over the years, I’ve noticed one button that’s often not used.  It’s the fixed-point high-pass filter button on each channel – those now it’s found as an adjustable point on many consoles.

The single high-pass filter is often labeled as “/80” or “/100.”  Honestly, not the best label choice.  How many new sound tech’s would know what the number represented, let alone would know what happens when they pressed it?  But anyway…

What is a high-pass filter?

A high-pass filter also has a slope associated with it.  Think of it as the rate of reduction of that filter. 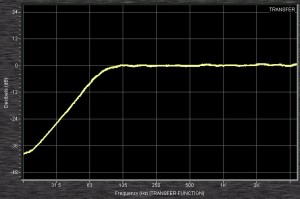 In this image you can see that the hpf filters out frequencies by attenuating (cutting) their decibel levels.  In advanced filters, you can control the degree of the slope.

This label indicates a filter (/) and the frequency point for the filter.  In the case of “/80,” it’s saying filter out all frequencies below 80 Hz.  A resulting hpf then might look like the image here.

What about Digital Consoles?

Digital consoles, and a handful of analog consoles allow for a rolling frequency point.  This way you can roll up the filter to whatever level is needed.  For example, one vocalist might have an HPF set at 125 Hz while another has it at 187 Hz.

Why should I use a channel’s high-pass filter?

There are mean nasty ogres that live in the lower frequencies.  They walk around the stage speaking in tones so low…”how low are they?”  They’re so low that they sound like deep earthly rumblings.  And when the hpf isn’t engaged, you get all those rumbling in your sound system.

Wait a minute, that’s not the whole truth!  If they were there all the time, wouldn’t there always be a filter at that frequency?  True indeed.

Frequencies in that lower range can be both good and bad.  Kick drum, bass guitar, Froggy from the Little Rascals, those all work around that range.  However, a tenor’s vocal microphone that picks up the kick drum on the stage…not good.  It’s in these areas you start using the high-pass filter.

Rules to using the high-pass filter

Rules in audio mixing are few and far between.  Guidelines are more the terminology but when it comes down to it, if it sounds good then it’s right.  With that in mind, there are times when I’ll engage the hpf for a guitar and times when I won’t.  There are some simple guidelines you can follow;

The high-pass filter channel control shouldn’t go untouched.  It’s one more way you can clear up your mix and provide the best sound possible.

Question(s): How do you use the hpf?  What other types of filtering have you used?