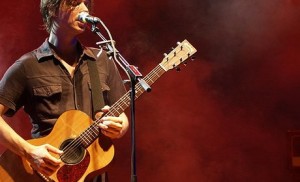 Start with the sound at the source.
Photo provided by fabrizio

Acoustic guitars can have on-board amplifiers with EQ settings.  If the guitar’s EQ settings aren’t set properly, then it means you have a terrible incoming sound before you start mixing.  Set the guitar’s on-board EQ settings all to zero (neither boosted nor cut).  The next time you have a chance, work with the musician one-on-one on getting the on-board EQ set while the mixer has no EQ modifications.  This way, you get the optimal sound coming from the guitar and the easier it will be to mix.

2. Three Months or 30,000 Strums – Check the quality of the guitar strings

Guitar strings are like the oil in a car.  When the oil in the car gets old, your engine’s performance suffers.  Old guitar strings are detrimental to a guitar sound.  This happens in two ways.  The first is that old guitar strings can easily go out of tune.  Secondly, while they might be in tune, they sound bad.  Think of it like looking at old oil that’s dark black and while you might say it’s still working in the car, ask yourself the question, “does it look like something that would be working as effectively as possible?”  For this reason, if you hear a guitarist with old strings, talk with them about it and explain how it’s detrimental to the music.

[whispers] If the guitarist still doesn’t change their strings after a few weeks, I’ve got a pair of wire cutters you can borrow.

3. Set the volume in the right place

Sometimes, a simple volume boost is all it takes to get the guitar to “sit in the right place” in the mix.  One thing you need to do is listen to how the guitar is used in the particular song. The guitar will have times when it needs to lead but it should also be part of a mix, not something that overpowers all the other instruments.  The best tip I can give regarding volume is to mute the acoustic guitar in the mix for a few seconds and then un-mute it.  You’ll immediately notice if the volume is too loud or too soft.

4. Listen for the low-end

A mix with other low-end instruments such as one with both drums and a bass has no use for the low-end frequencies of the guitar. That is to say, there is a limit on how much low-end the guitar can benefit the sound instead of harming it. Think of mixing paint.  The more similar dark tones, the more you get an ugly grayish, well, it’s not pretty. Roll off the lows until you find the sound in the mix is just a little clearer than it was before.

5. Listen for the high-end

This might be the hardest area of mixing an acoustic guitar.  The best place to start is in the 1kHz and 2kHz areas.  Boosting in these areas can give your guitar the fullness you desire.  Mixing is an art so expect to spend some time working with these frequencies to find out what works for a particular guitar.

8. Consider the other instruments

Mixing isn’t about getting the best sound out of each instrument.  Mixing is about blending all of the sounds into the best mix.  A wonderful sounding mix can have an acoustic guitar that sounds horrible on its own.  Therefore, when mixing the acoustic guitar, consider the other instruments in the mix and what you could take away from one of those that would enable the guitar to cut through the mix. An old trick is “cutting before boosting” which not only applies to removing bad frequencies but also applies to decreasing frequency properties of one instrument so another can shine through.