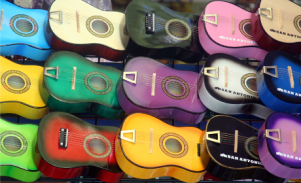 1. No EQ.  I’m not one to say which is worse of these but in my book, this one is at the top because it’s indicative of the sound tech’s mixing process.  Using an analogy I’ve used before, it’s like making a batch of chili.  Each instrument or vocal channel is an ingredient.  Let’s take the beans for example.  Do you like kidney beans, chili beans, mild chili beans, or spicy beans in your chili?  The acoustic guitar is the can of beans.  You need to make it the right type for your musical chili.

All too often, I’ve seen churches use a mixing board as an expensive volume controller.  For ideas on how to EQ an acoustic guitar, check out this article; EQ Acoustic Guitar.

2. Too bright.  Acoustic guitars produce a variety of natural tones depending on the wood used in their composition.  Ovation guitars use a “plastic” rounded back that gives a unique sound.  Guitar strings can also affect the sound.  Some guitars give warm tones while others are bright.  Some have a more bassy sound.  The mistake of “too bright” comes in two ways;

3. Volume too high.  The acoustic guitar is front and center to many a worship team and therefore, it’s easy to want to drive it in the mix.  However, it has to sit in the mix in the right way depending on the desires of the band and the way it’s used in a song.  A song that is piano-driven needs the piano out in front.  The piano is the instrument the congregation will be following.  The guitar will have times when it needs to lead but it should also be part of a mix, not something that overpowers all the other instruments.

4. Volume too low.  This happens as a result of a sound check in which the monitor levels of the guitar are set too high and thus the house mix set too low.  When it comes time for the service, the monitor mix volume is fine on the stage but isn’t loud enough to make up for the new dynamics in house due to the presence of the congregation and their singing along.  The monitor mix should not be heard past the second or third row of seats in the sanctuary.  Stick with this rule and it will be obvious which volume you are hearing.

5. Ye Ol’ Geetar Strangs.  Guitar strings are like the oil in a car.  When the oil in the car gets old, your engine’s performance suffers.  Old guitar strings are detrimental to a guitar sound.  This happens in two ways.  The first is that old guitar strings come out-of-tune easily.  Secondly, while they might be in tune, they sound bad.  Think of it like looking at old oil that’s dark black and while you might say it’s still working in the car…does it look like something that would be working as effectively as possible in the car?  For this reason, if you hear a guitarist with bad strings, talk with them about it and explain how it’s detrimental to the music.

6. Mixed alone.  All instruments should be mixed together for the best sound.  And to explain that, let’s talk omelets.  Crack a few eggs, add some sausage, add some onions, add some peppers, and now add salt and pepper.  The addition of salt and pepper might have just destroyed your perfect omelet.  The reason is that all sausage is not the same.  Some sausage is unseasoned.  Other sausage has salt and seasoning already added.  By adding salt to a recipe with an already salty sausage…you can just toss that omelet in the trash can.

You can have instruments (ingredients) that individually sound great but when you put them together, the mix sounds terrible.  Without going into a twenty-page discussion on mixing instruments together, keep this key idea in mind; before you boost the frequency for one instrument to make it stand out, try cutting those frequencies from another instrument.

7. Poor presence.  This might be the hardest area of mixing an acoustic guitar.  A guitar mix can have a good sound but when compared to a mix where the sound guy nailed the presence, your mix sounds flat.  The best place to start is in the 1kHz and 2kHz areas.  Boosting in these areas can give your guitar the fullness you desire.  Mixing is an art so expect to spend some time working with these frequencies to find out what works for a particular guitar.

8. Mixing multiple guitars incorrectly.  You don’t want the instruments to lose their individuality but at the same time, you want to give a unique yet blended sound.  This can be done through the use of EQ separation and pairing, panning, and through talking with the guitarists as to how they can create a well blended, yet different, sound using methods like bar chords and capo’s.  I’ve covered this topic in depth here; How to Mix Multiple Guitars.

These eight common acoustic guitar mixing mistakes can be corrected using the techniques highlighted in this article and the links provided.  Mixing takes practice and remember that the greatest live audio engineers started out knowing nothing about mixing.