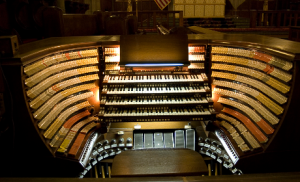 Christmas productions are right around the corner.  These are usually the most stressful events for any sound tech because you are working with more people on the stage, kids, and a lot of variables where anything can go wrong at any time.  Oh, and let’s not forget all the extra expectations.  Here are the six issues that tend to come up during Christmas productions and how you can address each one.

1. Where can I hide the monitors?

A Christmas production often transforms the stage into a scene.  It might be the manger scene; it might be a changing set.  What happens when those floor monitors suddenly stand out and you’ll be asked “can we get rid of these monitors or can we move them?”  Depending on the production, you might be able to remove them but you also might be stuck using them because you’ll be playing backing tracks for singers.

In the case of kids needing microphones for the spoken words, there is nothing better than fitting them with their own wireless microphone.  They’re too nervous to hold a handheld mic at the right location and you don’t want that anyway.  You can try hiding a condenser microphone in the scene, specifically in the area where they are standing, but more times than not, they aren’t going to project their voices loud enough for the mic’s to produce reliable amplification.

A problem I’ve observed is when they stand together as a small choir but they aren’t anywhere near choir mic’s.  Additionally, you get the kids singing significantly softer than others.  You want “mom & dad” to hear their kid but sometimes that’s just not possible given the age and ability and shyness of the kids.  I’ve used condensers on a mic stand as a temporary way to get a choir-mic-setup closer to the group of kids.

3. How do I get more vocal microphones?

4. How do I simplify all the CD tracks and computer audio tracks?

You could be handed a multi-track CD for the choir where one song spans seven tracks.  Get a few of those songs and anything else added in, you’ve got to be on your A-game to survive.  I find the best way to handle multiple tracks is through simplification.  Merge that seven-track song into one song.  Take all the tracks and place them either in a computer playlist or on a CD in the order they will be played.  If you are going the computer route, consider appending the track name with the order number at the beginning.  This way, if the song order is messed up, you simply sort on track title and you’re all set.

5. How do I quickly change the set around between scenes?

Friends, Romans, countrymen, lend me your arms and legs.  Recruit a few people to help you with set changes.  Many hands make light work.

Use colored tape on the stage to mark mic stand placement.  I’ve even marked the three spots where a mic stand’s tripod legs would go so the mic was aimed right where it’s needed without having to re-adjust it. You could also have all red tape for items in scene one, yellow tape for scene two, green for scene three, etc.

6. How do I change the mic usage on the board for multiple users of the same mic – different scenes?

Not only can stage scenes change but you might have a situation where more than one person uses the same microphone.  You have two options;

First, if you are working in the digital world, you can save your different scenes so when you recall a scene, you have all your board settings for the right people.

Second, if you are in the analog world, you’ve got a few options.  During rehearsals, set a gain structure that works for two different people.  You’ll have to change the fader but your gain wouldn’t need to change.  That’s the easy option.  The other option is to manually write down the channel gain settings for each person and between scenes, change the gain.

There are all types of issues that can arise for a Christmas production.  The key to success is finding the solution that requires the least amount of work and the most reliability during the live production.

Question: How have you dealt with Christmas production issues?