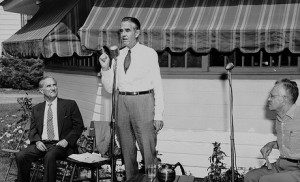 Sound comes from vibrations caused by fluctutations in the air pressure. In fact, that’s how the ear drum works. It records the pounding of sound waves against it and converts it into something our brain can understand.

Sound technicians deal with not only live sound but also electrical “sound.” When a person talks into a microphone, their voice is converted to a electrical sound known as an audio signal. This audio signal has many characteristics and properties in relation to all sounds coming through the sound system. That’s why each microphone or sound source such as a CD player, has it’s own channel on a mixing board. These sounds must all be balanced together to provide a “joyful noise.”

Technicians deal with controlling and changing the different sounds (audio signals) by altering volume, pitch, sound effects, and equalization. Equalization deals with modifying sound frequencies to fit the need – think treble and bass. For example, equalization settings (EQ) for a talk radio station are much different than a musical format.

What makes a sound good or bad? Primarily, it’s the conditioning of the sound through proper EQ, volume level mixing, and anything else the engineer can tweak. Done corrently, the sound is good. Done incorrectly, the sound is bad or just bland. But there are other conditions that easily create bad sound.

Sound bounces. Bouncing sound waves can be bad. If a voice is picked up and amplified by a second microphone after a far bounce, the sound coming from the speakers can sound bad. For the purpose of this introductory section on sound, don’t worry about what makes it sound bad, just know microphone placement is important.

Feedback creates bad sound. It also blesses us with akward moments and periods of sheer frustration. Feedback is the annoying sound produced when a microphone, or other recording source, detects and amplifies its own signal from a speaker. This creates a looping effect and this tone can grow in strength and volume. Typically, it’s caused by a microphone too close to a monitor. It can also be caused by a microphone that’s too far from the sound source and has its volume increased in an attempt to make up for the distance.

A “joyful noise” comes from three parts; components that correctly condition the sound for the unique environment, correct microphone placement to record sounds, and a skilled sound technician that controls and modifies all the sounds. If any of these three parts are not present, your church sound suffers.

You now know the basics of how the sound from a source, like a singer, moves through a sound system and out to the speakers. You have also learned that sound technicians do more than turn the volume up and down.