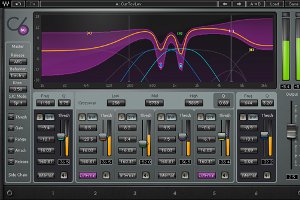 [Guest post by Tim Boyer] Ok, so you’ve made the big switch from the glory days of Analog Desks and are learning your way around that shining new Digital Desk and you start using audio plugins.  I get it; it can be a daunting task if you’re not doing it everyday. Even if you are, there’s a road of confusion and mystery if you get too far ahead of yourself and resurfacing back up to the top layer can be tuff. I promise, once you get enough “time in the chair” and understand a few key things, it becomes second nature.

Today we are going to tackle the early stage of Plugin’s. The concept is easy enough – emulate some really great sounding vintage gear, or reinvent the idea of multiband compression, etc. The bottom line is with these tools you can really shape your sound when you’re using this stuff in a thoughtful way. The other side can be a bit scary though too.

I remember when a Plugin Manufacturer was giving away a limited version of one of their big ones. I was talking with my friend and mentor Ben West (PooleyWestMusic, P!Nk, etc.) and asked his thoughts on it. His response was priceless; “there’s a lot of ways to screw up a mix.”  Brilliant! I get what he’s saying though – plugins manipulate your sound, so when you start playing with plugins you have be conscious of what you’re doing. I think that brings me to my first “point.”

I recently had the pleasure of sitting in a session with Robert Scovill (Tom Petty & The Heartbreakers, Matchbox Twenty, Prince, Rush, Def Leppard). I was taken aback when he put a Sans Amp Plugin on the bottom snare and then made it overdrive, a lot. Crazy, right?!? But, when he put in the context of the mix, it was brilliant. Note: I DO NOT recommend putting overdrive on a snare in the context of “How Great is Our God” – Ha! – Endnote.

A lot of plugins have vintage roots. I’m not ashamed to say I love the Waves Plugins because they do such a great job about emulate the old 2A, 3A and 1176 stuff. But there are “premium rack effects” that do a great job at this, too.  There are some awesome “new style” plugins that are great, like the C4 & C6.  The H Delay and H Comp are common for me as well, again all in the Waves arena.

It can be as simple as just hitting an insert point on your desk – but it doesn’t have to be. You could place a plugin in your rack, and route group vocals to it. Or, sidechain one to another. A common example of this would be side chaining your gate on your bottom snare to your top snare mic so that is opens when it first receiving audio on top, instead of the delay of waiting till audio hits the bottom mic. Neat huh? Or – what about playing with the placement of insert points? Say you put a verb on the feeds a delay, or visa versa. I think the point here is to be intentional and if its not working, change it.

If you’re on one of the “big” consoles you get the advantage of “Virtual Soundcheck.” It’s revolutionized my mix but not because I’m making a TON of changes after the band leaves, but rather it gives me a chance to try stuff without ruffling feathers. I still take on the responsibility of making sure these guys are getting the best mix I can give them, so I try not to change a lot if they’re coming in the next day, but this gives me a chance to try stuff that I usually wouldn’t be able to do. I encourage it. If you’re not on a machine that helps you do this, I would recommend talking with your band to see if they can just play for a while, giving you time to try stuff, without a time constraint.

Lastly, all my engineers – both volunteer at Church or my paid guys that work around town know this about me; I don’t need you to be the most talented engineer, I just need you to be focused.  The use of plugins should always be accompanied by a specific choice in your head, first. Stay engaged in the process of mixing and you’ll generally fair pretty well.

I’ve included a list of plugins that I consider my “go-to” audio plugins. Hopefully they’ll help you get started, or at least get your brain engaged! Enjoy!

I hope I’ve helped you grasp working with audio plugins!

Tim Boyer is the Technical Director in Detroit for Kensington Church – Orion.  You can email him at  [email]Tim.Boyer@kensingtonchurch.org[/email] or check out his SoundBetter profile.