Mixing in a Different Room? Don’t Make This Assumption 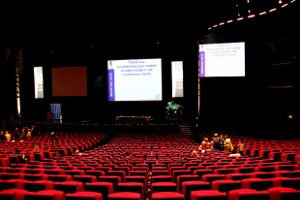 Don’t let the room fool you!

One day it happens.  You’re asked to mix someplace new.  Could you mix our band at another church?  Could you mix in the kids venue?  Or the big one, are you ready to mix in a new sanctuary…because we are building a new one!?!

A definition of sanctuary is a place of refuge and protection.  If you’ve always mixed in the same venue, you’ve been protected from a cold hard truth; what works in one venue will not work in other venues.  I’ll be honest, I used to think the same thing.  I recall standing behind the mixer thinking, “this sounds good at my church, why doesn’t it sound right here?  What am I doing wrong?”

Why the venue makes a difference

I’ve mixed the same group in multiple venues and each mix called for unique changes because the room acoustics were so different.  I’ve mixed in two churches with sanctuaries of the same size but massively different acoustic properties.  Each room is unique!

The acoustic properties of a room could include:

The sound waves of the reflections collide with the sound waves of the original sound and this is called acoustic interference, and it can be either constructive (additive) or destructive (canceling). This depends on the point in time when the sound waves are combined.  Those in-phase will increase their level and those nearly 180-degrees out of phase will cancel out.  The resulting sound wave heard by the listener will have peaks and valleys like that of a hair comb, thus the name.

The Shure SM58 microphone has been around for a long time and used in many churches.  That being said, there are better-sounding vocal microphones.  You might use SM58’s and then have to mix in a room with a twenty-dollar generic-brand microphone.  Even at this level, you’ll miss your SM58’s.

Not only do microphone differences make a big impact, but so does most equipment following that signal.  The quality of the speakers, the audio console, the effects units, and every other piece of signal processing gear affects the sound.

The equipment settings make a big difference.  For example, the house EQ should be set for the room and based on the audio needs and usage.  This doesn’t mean the same sound will sound the same in every venue.  One venue might have a low-end boost in the house EQ while another has a low-end cut.  And we’re also assuming the house EQ’s have been correctly set.  It does help to look at the house EQ in a venue to get an idea of what’s going on in the room or what the in-house tech believes it needs.

Mixing the same musicians in a different venue is good because you know how they should sound.  What happens when it’s a different band or different pastor?  I’ve mixed a number of weddings so I’m working with different pastors.  Then, guest mixing for a service or helping with a mix evaluation and it’s a whole new ballgame.

This is just talking about their general sound.  Then you’ve got issues such as a guitarist who doesn’t know how to set a good amp tone or bands who are used to too much volume from their monitors.  These make a huge impact in mixing.

How to mix in a different venue

This is the source of sounds so know what you’ve got.  Not only should you spend time on stage, setting up microphones for proper placement, you should know what microphones are in use.  Also, you might find a problem like a condenser used where a dynamic would be better, or vice-versa.  Also, check the microphones for pad switches and polarity switches.  Are they set correctly?  When you end up behind the mixer and notice an instrument doesn’t sound right, you’ll be at the place where the correction is done via the mixer.

2. Create a rough mix by cleaning up sounds.

If you’re lucky, the moment the band starts their practice, an amazing sound will emanate from the speakers.  Most likely, you’ll need to build the mix from scratch.  Start by setting the gains, enabling high-pass filters where warranted, and then doing the clean-up work.

Clean-up is about rolling off excess and removing offending frequencies.  It’s also a good time to add in drum mic gating and a bit of compression on vocals.  At this point, it’s like getting the channel inputs ready for the real mixing and you can’t do that until you’ve done a bit of sanding.

I can’t state this enough; listen.  Listen for the amount of reverb in the room.  Listen to how each instrument and vocal sounds together.  Walk the room to hear how the rough mix sounds in all parts of the room.  Take an SPL meter to check for volume differences throughout the room.

If you’re at a small venue, think speakers on stands, then ask for permission to turn the speakers if that would produce a better sound with more even coverage.

At this point, the stage is set, a rough mix is dialed in, and you know how it sounds throughout the room.  Now perform the in-depth mix work.  And this is where you might find yourself in a sticky situation.  I know, I’ve been through it.

In most cases, you’re left to do your job.  In some cases, you’ll find a critic in the room.  Consider them a friend, not a foe.  They’ll be waiting to say something.  The person is likely to know the sound they typically hear in the venue.  They are listening to hear if you can match it.  Once you think you’re done, ask them for a review.

I joke with that last question but let’s be honest, some people don’t know good sound when they hear it.  But for the sake of this discussion, let’s assume they do.

You might hear replies like, “there needs to be more bass” or “it doesn’t sound right when I stand here.”  They might say, “Our church doesn’t run electric guitars that loud.”

Time to make some hard decisions.  You need to consider their opinion, weigh it against your own knowledge of audio production, and consider it in light of your job.  For example, if it’s a seventy year-old man who says there’s too much of the electric guitars but the event is for a youth event where kids are known to listen to contemporary music, then you can discard his comment.  But, if you are guest mixing a service, such as filling in for a friend, then you need to mix for their expectations and not your own personal preferences.

The key to creating a good mix in any venue is treating it for what it is, a unique space.  Be it a youth room, a sanctuary, a conference room, or a gymnasium, each space is different and each need is different.  Go into it with that mindset and you’ll do great.