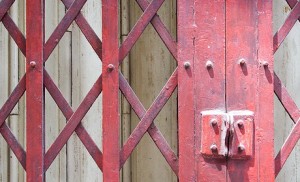 Last week, I was called into a church for resolving a wireless microphone problem. Over the phone, it sounded like an easy fix. Once I got there, that’s when the real trouble started.

Talking with the guy at the church, he explained they were having interference with one of the microphones. Please note, this church is very close to the interstate and a huge truck stop. CB interference was likely. I checked all of their wireless microphones for the frequency ranges they used. Everything was in the UHF (Ultra High frequency) range – nothing in which the CB radios should interfere.

All the microphones were active for about twenty minutes with zero interference. Then, I walked up to the stage and knelt down by the receiver units and the house speakers started emitting a painful sound. I looked at the receiver units and one had the clip light flashing. I moved back and it stopped. I moved in again and the awful sound started again. So I squelched it.

A definition of squelch is, according to the Merriam-Webster dictionary, “to completely suppress.” By suppressing or stopping a sound, you aren’t giving it any volume in your house speakers. Wireless receivers have the ability to squelch sound as well. Imagine a squelch circuit which acts much like a noise gate. If the signal level of the radio frequency is below a certain amount, the gate stays closed and nothing gets passed to the mixer channel. When the signal is strong enough, the signal is passed along. At this point, the squelch circuit is keeping background noise from being passed to your channel.

But what about interference? Is there a way to squelch that? In short, yes.

“Interference complicates the [squelch circuit] situation considerably. Interfering signals can trick the receiver into un-muting the audio output, especially when the wireless transmitter is turned off. One approach to this problem is to make the squelch point adjustable. Often a squelch setting can be found that will un-mute the receiver when the strong transmitter signal is received, but not when only the weaker interfering signal is present. Unfortunately, a high or “tight” squelch setting usually will also reduce the maximum range of the wireless system. This is because the transmitter must be relatively close in order to deliver the necessary strong signal to the receiver.”

On the back of your analog wireless microphones will be a small knob labeled “squelch.” Which begs the question…

How do I set the squelch?

Shure microphones give you a simple set of instructions;

There are a lot of benefits of using wireless microphones. At the same time, using wireless technology means you are introducing a whole new host of potential problems. The next time you have an interference issue with a wireless microphone, listen to what being emitting through that channel. If it’s the nastiest sound you’ve ever heard, then it’s likely a problem you can easily squelch.